Michigan Gets Flying Monkeys for $40 Million 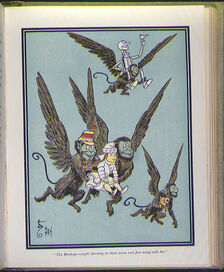 As reported recently in Michigan Capitol Confidential, Michigan taxpayers shelled out a cool $40 million in tax credits to the House of Mouse for the perceived benefits of filming the movie "Oz: The Great and Powerful" in our state.

As noted by several Mackinac Center analysts, there are reasons aplenty for opposing film subsidies given to any movie.

Just what exactly did Michigan residents get for their government's extremely generous $40 million gift to Disney? Even if "Oz: The Great and Powerful" measured up to the aesthetics of MGM's 1939 classic "The Wonderful Wizard of Oz" (it doesn't), it would still be a bust for those of us who paid for it — but is the movie successful on its own merits?

While this writer hasn’t yet tried syncing a Pink Floyd album to "Oz," he has found that it resurrects the allegorical elements from the original novel by L. Frank Baum that were left, for the most part, out of the 1939 film. Come to think of it, Disney’s new Oz comes closer to evoking the spirit of Floyd's "Money" than Judy Garland ever could.

Once in Oz, Oscar (also called Oz throughout the film) meets three witches, all of them at first beautiful. One, however, is destined to evolve into the green-skinned harpy portrayed by Margaret Hamilton in 1939, another is Glinda the Good Witch, and one will wind up the worse for wear when she eventually suffers from a housing crash in the MGM film.

As in Baum's source material, the allegorical implications abound. If green is bad in Oz, emerald is even worse. Oz's Emerald City once again refers to Wall Street with its abundance of wealth with which to entice Oscar, who becomes a representation of politicians both good and bad. The two sister witches, Evanora (Rachel Weisz) and Theodora (Mila Kunis) stand in, presumably, for bankers and Republicans — or would that be Sarah Palin and Ann Coulter?

Glinda, of course, represents a pure version of American politics. Her father had been the king of Oz until his murder by one of the moneyed interests listed above. It is left to Oscar to replace him, but Oscar is vain, avaricious and, frankly, a fraud, a con artist and a flim-flam man of the lowest order — in short, Hollywood’s view of the first eight years of this century’s national politics.

In this universe, those nasty flying monkeys represent any media outlet that gravitates right of center. The monkeys, minions of the two evil witches, chase Glinda, Oscar, a fragile yet tough China doll (the economy) and Finley, a loyal and therefore cuter flying monkey (voiced by Zach Braff), to a (fiscal) cliff whereupon they escape in — yup, you guessed it — bubbles.

In this myopic view of the creation and bursting of the housing bubble, it's all the fault of conservatives and Wall Street. While certainly deserving their fair share of the blame, the opposing party and those who took out loans they couldn't afford seemingly get a pass from director Sam Raimi and his screenwriters. It's even more populist propaganda than Baum's original book.

And it's Oscar who eventually saves the day by finally realizing his true potential. "The Great and Powerful Oz" really isn't either, but the filmmakers seem to say the illusion thereof is enough to carry the day against corporate greed and nasty conservatives.

Once Oscar gets past his lust for feminine beauty and gold, he employs new-fangled cinema-projection technology borrowed from Thomas Edison to create the illusion of power and greatness to battle evil. His name, after all, is Oscar, also the name given the highest award in moviedom. A true leader, after all, is nothing more than an appealing media star — as long as he supports a populist agenda!

This, dear Michigan readers, is the bang you receive for the bucks you invested in "Oz: The Great and Powerful." It's a nominally entertaining film that seems more interested in allegorically defending its two-fisted grab of taxpayer money as necessary to fight flying monkeys and witches.