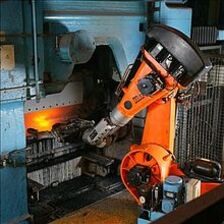 Typing on computers that have replaced typewriters, which previously replaced ink-pen and paper, some reporters write about the concern that increased productivity is leading to irreversible job losses for workers.

"Some experts now believe that computers and robots will take over much of the work performed by humans, raising critical concerns about the future of jobs," wrote business and economics columnist Rick Haglund in MLive.

"For decades, science fiction warned of a future when we would be architects of our own obsolescence, replaced by our machines," read the AP. "An Associated Press analysis finds that the future has arrived."

Luckily for workers, the idea that robots and technology will lead to overall widespread job losses is nonsense.

These predictions have been made since the Industrial Revolution and before — and gains momentum whenever new technology arises. Right now, people think of machines replacing autoworkers and grocery store clerks, but decades ago, neo-Luddites worried about cars replacing horses and tractors substituting farmers. As I noted in an article last summer:

When this country was founded, approximately 90 percent of people worked in agriculture. By 1900, growing enough food only required 40 out of every 100 workers. Today, less than 1 percent of U.S. workers feed not just America, but many more people all around the world.

The massive increase in farm productivity is purely due to technology. Farmers used to harvest grain with a sickle, but then came Mr. McCormick’s reaper, followed by motor-driven tractors and combines. More recently, chemical and biological advancements have greatly increased yields. With each advance, fewer workers were needed to grow food. To cite just one example, today American farms produce five times as much corn on 20 percent less land than 70 years ago.

And yet the loss of all those farm jobs did not produce 89 percent unemployment … because the greater efficiency in farming equipment freed up resources to move into other areas of the economy.

A main part of the workforce in America has gone from family farms to mass agriculture to manufacturing to service-sector jobs all because of technological advancements. The idea that new products will continue to substantially change the economy and workforce is to be expected.

But while change can be difficult in the short-term and lead to temporary job losses, it is good for the overall economy. In economics, this is known as “creative destruction” — the practice of less efficient segments of the economy being replaced by more productive and innovative businesses.

This increased efficiency has lead to real gains for the average person. As economists Mark Perry and Don Boudreaux write in The Wall Street Journal, the standard of living has increased substantially over time:

No single measure of well-being is more informative or important than life expectancy. Happily, an American born today can expect to live approximately 79 years — a full five years longer than in 1980 and more than a decade longer than in 1950. These longer life spans aren't just enjoyed by "privileged" Americans.

As the New York Times reported this past June 7, "The gap in life expectancy between whites and blacks in America has narrowed, reaching the lowest point ever recorded." This necessarily means that life expectancy for blacks has risen even more impressively than it has for whites.

Americans are also much better able to enjoy their longer lives. According to the Bureau of Economic Analysis, spending by households on many of modern life's "basics" — food at home, automobiles, clothing and footwear, household furnishings and equipment, and housing and utilities — fell from 53% of disposable income in 1950 to 44% in 1970 to 32% today.

As spending on these items fell, people were freed up to spend money in other areas of life. In turn, jobs were created in other industries.

The loss of a job and the economic hardship it leads to is tough. But greater government involvement into the economy to hold on to older and less efficient industries would lead to less productivity, less innovation and less prosperity for everyone.

There Is an Endless Number of Jobs