Media inflates number of protesters at rally against worker freedom

The mainstream media has persisted in reporting that around 12,500 union members participated in the rally against worker freedom at the state Capitol.

The Capitol’s facilities management office estimate was in the same ballpark. This was the number the unions had predicted.

However, many experienced Lansing hands who were present believe the crowd was barely half that size. In one sense it’s irrelevant, because the bill is now law. And yet, if the lower estimates are the correct ones, this would be the second indication in the past two months that the political appeal and power of unions here is much less than imagined.

The first indication was the overwhelming defeat of the union-funded Proposal 2 ballot initiative, which would have banned a right-to-work law in Michigan, among other things. Based on the numbers, even many Michigan Democrats who voted to re-elect President Obama voted against the unions on Proposal 2.

So were the union protest numbers juiced-up? You decide. Below is a photo taken from the fourth floor of the Capitol building at 10:05 a.m. on Dec. 11, 2012, during the protest against worker freedom. The crowd size increased somewhat over the next hour, but not dramatically so. Starting around noon hundreds of people were seen streaming away from the Capitol (it was cold). 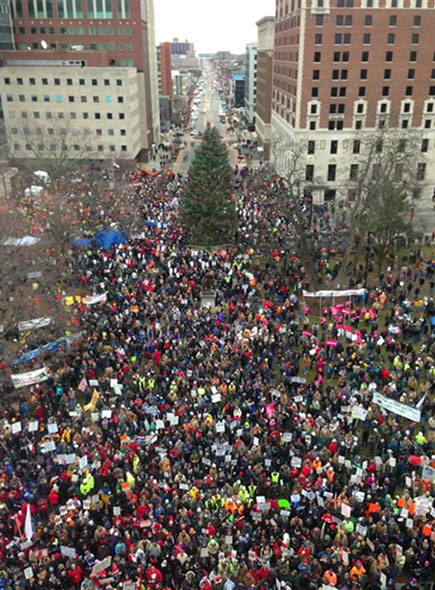 The photo below was taken from the same location on April 15, 2009, and shows the largest tea party demonstration held in Michigan that day (at least a dozen smaller demonstrations also occurred around the state). Crowd estimates that day were in the 5,000 range. 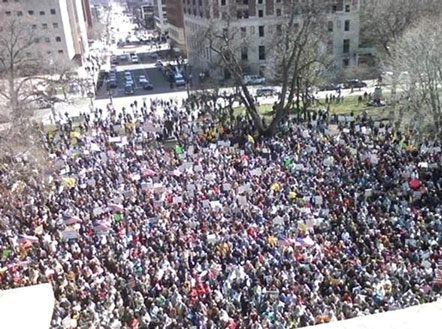 Here is the assessment from one of those long-time Lansing observers — myself: The unions turned out around 6,000 people, and perhaps a few more given their greater dispersion, but nowhere near the 12,500 reported.