'When it arrives on my desk, I plan on signing it' 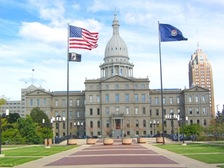 Michigan Governor Rick Snyder said today that a bill will be introduced that would make Michigan the nation's 24th right-to-work state.

"When it arrives on my desk, I plan on signing it," he said.

In a press conference with the House and Senate Majority leaders and three union members, the Governor suggested that a bill would be introduced today.

Under the legislation, employees would only pay union representation fees (also called "agency fees") if they chose to do so. Federal law prohibits workers from being required to be union members and pay union dues as a condition of employment. However, unless a state has a right-to-work law, employees in companies where a union already exists are forced to pay union fees if they don't pay the dues. Typically, the fees are nearly as costly as the dues.

"I'm asking that we pass an act that gives workers freedom in the workplace," said Governor Rick Snyder.

The governor called it "pro-worker" and said he wants it "promptly and efficiently."

The Governor said the legislation will cover both public and private-sector with one carve out for public safety, meaning police and fire personnel. He said this was because of their "unique status" and cited Public Act 312, which creates a binding arbitration process for labor disputes.

"We have come together and believe this is the time to tackle this issue and do something about it," said Senate Majority Leader Randy Richardville. Richardville went on to note that he is generally in favor of collective bargaining and believes most members will choose to stay with the union.

All three Republican leaders emphasized that they support collective bargaining rights, but that union members should have a choice. They were joined on the panel by three union members: A teacher from Hamtramck, an AFL-CIO worker and a UAW member with Ford – the first two said they plan on staying with their union, but want people to have the choice.

The introduction of a right-to-work bill comes after the state's unions spent more than $23 million on Proposal 2, which would have permanently banned a right-to-work law in Michigan. Voters rejected the constitutional amendment change by a margin of 57 percent against to 43 percent in favor.

Immediately after the election, union executives defended their decision to try and guarantee forced unionism in the state constitution, but also began asking voters, business owners and Republican legislators to not pass a right-to-work bill because it would be divisive.

After Thanksgiving, unions began urging their members to call legislators to encourage a vote against any right-to-work bill. Training sessions also were held for those making calls, telling them how to act on the phone and what to say. Robocalls also reportedly were being made as well.

"I haven't personally heard the robocalls, but I've heard about them," Rep. Mike Shirkey, R-Clark Lake said. “The unions are definitely trying to stop the Freedom to Work legislation."

Passing a bill in the lame-duck session puts the vote in front of existing Legislators who are familiar with the issue. After the beginning of the year, new Legislators take office.

Last winter, when neighboring Indiana became the first Rust Belt state to adopt a right-to-work law, pressure intensified for Michigan to follow suit. However, Gov. Rick Snyder wasn't anxious to pick a fight with the unions over the issue.

The dynamics, however, changed after the November elections, and in line with a national (and increasingly bipartisan) trend against overreach by many government unions that continue to demand benefits that exceed those of the taxpayers.

Facts On Right to Work vs. Forced Unionization States

Collective Bargaining a 'Right' to Coerce