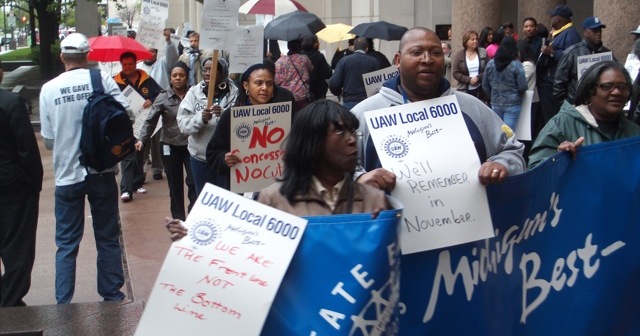 Collective Bargaining a 'Right' to Coerce

"Positive rights" and "negative rights" are the confusing terms applied to the types of individual rights recognized under different forms of government.

The U.S. Constitution recognizes the "negative" right of individuals to be free from government restrictions on what we can say, what church we attend, who we associate with, and more. These rights can't be taken away from a person even if a majority of citizens vote to do so.

Importantly, the government doesn't have to do anything for you to exercise these rights — it just has to not do anything that infringes your free exercise of them. That's why they're called "negative" rights. (They are also called "non-rivalous" rights, because every person can exercise them at the same time without diminishing anyone else’s ability to do so).

Other systems proclaim "positive" rights (the Soviet Union most notoriously), such as the right to food, housing, health care, etc. Under this concept, if you don't provide these things for yourself then someone else has a positive duty to provide them for you.

In effect, positive rights aren’t "rights" at all, but the power to coerce others. They grant every individual the "right" to live off his or her fellow citizens, authorizing force if necessary to take their stuff. The rawness of the coercion is masked by allowing only the government to do the actual taking through redistributionist tax and welfare policies, but it amounts to the same thing: Every individual has a right to other people's stuff.

The union-funded Proposal 2 would amend the Michigan Constitution to recognize a "right" to collective bargaining. This is radical because for the first time it would enshrine a positive right in a foundational document of our governmental system. To understand why this is so, it’s necessary to define the thing we’re being asked to establish as a human right.

Collective bargaining under current law prohibits an employer from negotiating pay, benefits, and terms of employment with an individual worker if at some time in the past at least 50 percent of the other employees who voted chose to be exclusively represented by a union. It also imposes a mandate on all employees to pay fees for the union representation, whether or not they want it.

In other words, it gives one group of people the power to coerce another group. Proposal 2 would label that power a “right,” but all the lipstick in the world can’t cover up the raw force at the heart of this exercise.

Language in Proposal 2 limits its effect on private-sector unionization by explicitly deferring to federal laws establishing comprehensive rules and procedures for this. Those federal laws themselves authorize the coercion described above, but they don’t establish it as an inalienable right. A state can choose not to allow unions to exercise important parts of this coercive power by passing a “right-to-work” law. Michigan has not chosen to do so, and Proposal 2 would prohibit it from ever doing so (absent a subsequent constitutional amendment).

And who are their employers? Us, of course, by way of our agents, the elected officials we choose through the democratic process. Proposal 2 gives government and public school employees in Michigan an inalienable right to boss around the rest of us.