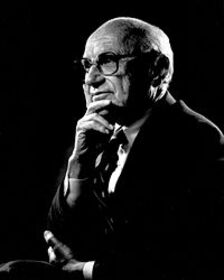 Milton Friedman is considered by some to be the father of today’s education reform movement. While this is a bit of a stretch, Friedman’s ideas have been extremely influential within the school choice movement and are frequently used to make both the economic and moral case for expanding parents’ freedom to choose the school they think is best for their children.

Friedman’s 1955 classic “The Role of Government in Education” was important for a number of reasons. First, it bluntly spelled out the problem with the public school system in the United States: monopolies that lack consumer-driven incentives. In short, the benefits of markets that Friedman had studied throughout his professional career were largely absent from the public education sector.

Second, public schooling was not seriously studied by many economists before 1955. Friedman’s piece can be seen as an invitation for economists to study education, encouraging them to apply economic principles to this field. Today, there are entire university departments dedicated to the economic study of education, including ones at Harvard, Stanford and the University of Arkansas.

Friedman advocated using vouchers to bring market-like principles to the public school system and reform its monopoly and lack of incentives for performance. He is often credited with creating the idea of vouchers, but in reality, vouchers had been in use in places like the Netherlands and, to a lesser extent, in Vermont and Maine, too.

Incidentally, the best test case of the implementation of Friedman’s ideas doesn’t come from the United States; it comes from Chile (which Friedman once famously visited and whose leader he advised). Chilean parents may choose from a large number of schools, including voucher-funded independent schools. The results of this experiment are impressive: According to a new Harvard study, Chile made the second-largest gains in student achievement among 40 developed countries between 1992 and 2011.

The United States has tried only modest voucher programs in places like Milwaukee, Cleveland and Washington, D.C., for example. The empirical evidence on the effectiveness of these limited programs has been somewhat underwhelming when it comes to boosting student achievement, but all of them deliver slightly better or similar results at a fraction of the cost of government-run schools.

While a full-fledged voucher program has yet to be tried in the United States, some of Dr. Friedman’s principles, to a certain degree, are evident in the charter public school and online learning movements. Fundamentally, these schooling alternatives are meant to provide more learning opportunities to students and enable some level of competition to prompt education providers to better meet the demands of students and parents.

Overall, the school choice movement that Dr. Friedman helped energize is arguably stronger than it’s ever been. The Wall Street Journal called 2011 “The Year of School Choice.” Voucher and tuition tax credit programs (superior to vouchers in many ways) are being expanded and popping up anew in many states. And an increasing number of people are recognizing the inherent problems associated with providing schooling through government-run monopolies. Further, economists and policymakers from all sides of the political spectrum are endorsing market-based reforms to address these shortcomings.

While Dr. Friedman may not have been the originator of the concept of educational freedom, his legacy has turned out to be long and powerful for the school choice movement.