A frequent source of concern is alcohol-related driving fatalities. The nonprofit Michigan Alcohol Policy Promoting Health & Safety has observed that the average fatal alcohol-related crash rate in 2009 was 7.5 percent lower for control states than for license states, according to data provided by the National Highway Traffic Safety Administration.[*]

This finding is for a single year and is therefore susceptible to bias and one-time deviations from the norm. Indeed, a difference-of-means test using the NHTSA data indicates the observed difference between the averages for control and license states is likely due to random chance, rather than the states’ alcohol policies.[†]

A more comprehensive analysis of traffic data has yielded interesting results. In a recent paper, John Pulito and Antony Davies (co-author of this Policy Brief) reviewed data on traffic fatalities from 1982 to 2002 in 49 states. They developed a statistical model that incorporated the aforementioned four-part classification of license states and heavy-, moderate- and light-control states, and they controlled for the presence of seat belt mandates, keg registration laws and other personal-conduct and alcohol-use laws that can influence traffic fatality rates.[9]

Pulito and Davies’ findings are arguably ambiguous under the more restrictive definition (alcohol-impaired fatalities), but are unambiguous under the more comprehensive definition (alcohol-involved fatalities). On the whole, their findings do not support the view that state alcohol controls reduce traffic-related fatalities. This outcome dovetails with Boudreaux and Williams’ finding, described above, of a lack of a statistically significant relationship between 2001-2005 drunk-driving fatalities and whether a state was a control state or license state.[15]

These results, of course, do not mean control states can’t experience improvements in alcohol-involved safety. Using data from the National Highway Traffic Safety Administration and the U.S. Census Bureau, the authors calculate that Michigan witnessed a 17 percent decline in alcohol-involved driving fatalities[§] per capita between 2001 and 2005.[16] This is good news.

But the reduction should be seen in context. For instance, seven other states saw their alcohol-involved driving fatality rates fall more quickly during the same period (see Graphic 2).[¶] Under the four-category classification described earlier, five of these states were license states (“no control”), while two, like Michigan, were light-control states. None was a moderate- or heavy-control state.

Some observers might suspect that Michigan’s fatality rate declines were lower than the seven states in the graphic because these states started with higher alcohol-involved driving fatality rates to begin with. But Connecticut and Massachusetts both had lower rates than Michigan did in 2001, while Iowa’s rate was initially close to Michigan’s — 4.9 vs. 4.7 deaths per 100,000 people, respectively — but ended below Michigan’s.[17] Nor is it clear that a higher initial death rate would make declines easier to achieve. A higher initial death rate could be a sign of systemic challenges that are intrinsic to the state and harder to address through policy initiatives. In any event, statistical tests again do not indicate that a state’s alcohol control regime affected the declines in alcohol-involved driving fatalities per capita.[**]

Graphic 2: States With a Larger Percentage Decline Than Michigan’s in Alcohol-Involved Driving Fatalities per Capita Between 2001 and 2005 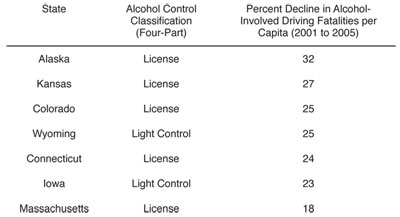 From 2001 to 2005, most states recorded declines in alcohol-involved fatality rates, and this appears to be statistically independent of the level of state alcohol controls. There are license states that have seen more rapid declines than Michigan has, and there are license states that registered lower alcohol-involved fatality rates at the end of the period than Michigan did.[18] Michigan’s alcohol controls do not appear to be responsible for its declining alcohol-related fatality rates.

[§] The National Highway Traffic Safety Administration “defines a fatal crash as alcohol-related or alcohol-involved if at least one driver or nonoccupant (such as a pedestrian or pedalcyclist) involved in the crash is determined to have had a blood alcohol concentration (BAC) of .01 gram per deciliter (g/dL) or higher. Thus, any fatality that occurs in an alcohol-related crash is considered an alcohol-related fatality.” See, for instance, “Priority Program Areas,” (National Highway Traffic Safety Administration), http://goo.gl/5e3Ge (accessed April 22, 2012).

[¶] Utah and Maryland were excluded from this analysis for reasons that have been described above (see Graphic 1).

[**] P-values do not suggest a link between the level of alcohol control and the average percent decline in alcohol-involved driving fatalities per capita between 2001 and 2005. The following results are generated for tests of the null hypothesis that there is no difference in the population means: 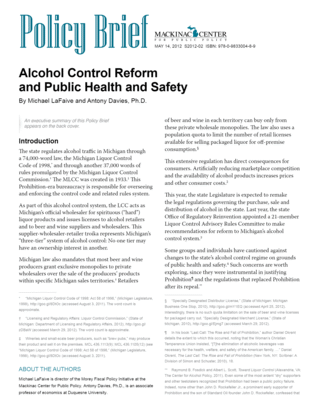