For every dollar of wages that school districts pay to employees covered by the state-run school pension system, they must kick-in an additional 25 cents to that system. This is up from around 10 cents in 2000, and without major reform the figure will only grow. The chart below breaks down the different components of this assessment. 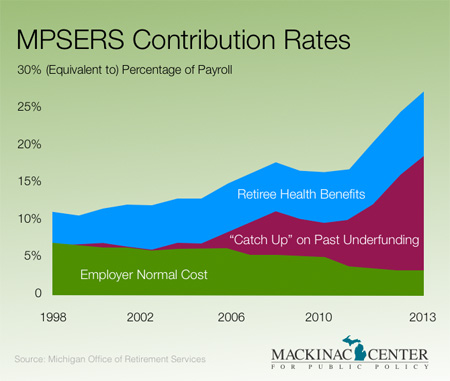 The bottom amount in the chart (shaded in green), shows the amount that taxpayers must contribute each year to pre-fund future pensions earned by all current school employees over another year of service. (School employees also contribute — see below.) Based on past history and optimistic assumptions used to calculate these costs, this so-called “normal cost” is almost certainly a “low-ball” amount, meaning that taxpayers can expect the unfunded pension liabilities to grow even larger going forward. Today those unfunded liabilities stand at $17.6 billion.

The middle area (shaded in red) is the amount taxpayers are paying to “catch up” on past underfunding. The state is trying to pay this down over the next 26 years. It’s the current price of all that past “low-balling.”

The top area (shaded in blue) is the amount taxpayers are paying each year to provide “Other Post Employment Benefits,” or OPEBs — the generous health insurance given to school retirees, many of whom stop working and start collecting in their mid-50s. Practically nothing has been set aside to cover this expense, which means the bills are paid from year-to-year on a “pay as you go” basis.

Importantly, these retiree health benefits are completely optional: The Legislature could vote tomorrow to end them outright or significantly reduce them. Since school employees are all eligible for federal Medicare benefits starting at age 65 (just like the rest of us), this option is not nearly as harsh as it sounds. In fact for taxpayers it would be the most kind and gentle option of all.

Finally, given all the past (and likely current) pension underfunding, readers may wonder why the green portion of the chart — the employer’s “normal cost” of prefunding future pensions — has been going down, not up. The figure only shows the amount taxpayers contribute for this benefit. School employees also contribute, and their share has been rising. Here’s how the relative shares have changed in recent years:

Changes now being debated in the state Senate do practically nothing to remedy the total pension cost burden, but instead merely shift a slightly larger portion of the (inadequate) contribution rate to employees.