2) Freeze and Close: Maximize the Results

The reason policymakers may close the MPSERS defined-benefit system is to provide some containment of growing unfunded liabilities. The concern over transition costs and potential political conflict also suggests that the remedy should be worth the trouble. In that case, legislators could also consider not just closing the defined-benefit plan to new members, but freezing the benefits earned by current members.

Consider, for instance, how lopsided employer contribution rates are for new MPSERS members. As Graphic 2 shows, in the coming fiscal year, hiring new public school employees in Michigan will require a school system to pay not only their salary and benefits, but also an additional contribution — more than 26 percent of their salary — into MPSERS for OPEB and pension benefits.[*], [48] Only 2.24 percentage points of those contributions pay for the pension benefits that the employees will earn for their work that year — i.e., the employer’s portion of the pension’s normal cost.[49] Much of the remainder — 12.49 percentage points — will pay off previous unfunded accrued liability.[†] For new employees, then, a substantial portion of the retirement money that school districts set aside after hiring them actually will pay for benefits that other employees and retirees have already earned.

As discussed under “Normal Cost” above, one reason for the low employer normal cost is the state’s questionably optimistic assumptions about the plan investments’ rate of return. But another reason for the relatively low employer normal cost is the state’s mandate that most members contribute directly to MPSERS by making payments straight from their paychecks toward their retirement benefits.[‡] In fiscal 2010, active members hired before July 1, 2010, contributed an average of 5.42 percent of their salary to the system, while active members hired on or after that date contributed 4.69 percent.[§],[50] Most MPSERS members are required to make contributions on a sliding scale, ranging up to “$510.00 plus 6.4 percent of the excess [of salary] over $15,000.”[¶],[51]

Graphic 2: MPSERS Employer Contribution for Fiscal 2013 as a Percentage of Payroll 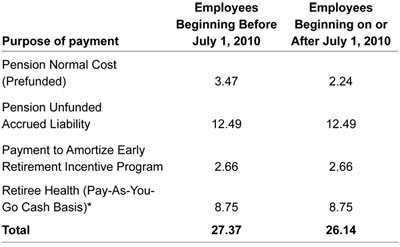 Freezing the plan means the state would honor all pension benefits already earned and all liabilities already generated, but would no longer allow existing active MPSERS members to earn new benefits (and generate new state liabilities) in the defined-benefit system. This step would also likely eliminate all of the employee payments to the MPSERS defined-benefit system, since these employee contributions are currently dedicated to paying the normal cost of any new pension benefits being earned, and under a freeze, no new benefits would be available. As discussed above under “Normal Cost,” this money would then be available as contributions to a new MPSERS defined-contribution plan.[**]

GASB guidelines are not entirely clear about the preferred accounting treatment for amortization payments on the unfunded liability in a frozen-and-closed system. In light of this, the state could consider constructing a responsible but backloaded amortization schedule. The state would meet its constitutional requirement to honor the accrued financial benefits of MPSERS retirees. Ideally, as discussed under “3) Just Pay It,” MPSERS employers would shorten the amortization period to pay these liabilities down within the average working lifetime of the workers who earned benefits under the defined-benefit plan.

Finally, if policymakers still decided to follow a level-dollar payment schedule and faced upfront “transition costs,”[††] they would at the same time be adopting a reform that created an even higher long-term cost containment than simply closing the plan would. MPSERS defined-benefit plan would incur no new liabilities for further service, even for current public school employees.

Freezing-and-closing would relieve uncertainty about Michigan’s public pensions by producing a predictable and a well-funded pension system. While the state might still face upfront “transition costs,” depending on the payment it adopts, this reform would fortify the protections afforded to taxpayers. Moreover, this reform could be coupled with others, such as reducing OPEB, to address any remaining “transition costs.”

[‡]  Depending on when an employee was hired (and whether he or she exercised the option to switch plans), he or she is a member of MPSERS defined-benefit Basic Plan, Member Investment Plan or new Pension Plus Plan. Only Basic Plan members do not contribute to their pension.

[**]  Some early MPSERS members are part of the system’s Basic Plan and do not make payments into the retirement plan. All other members do, however. Ibid.

[††]  Note that larger upfront payments under a level-dollar payment schedule would lower overall amortization costs. See the discussion under “3) Just Pay It.”