As noted above, the “transition cost” causing policymakers the most concern is that for switching to a level-dollar reporting schedule for paying down the unfunded liabilities of a closed MPSERS defined-benefit plan. The ORS calculates this figure could be $360 million in the first year of the transition (assuming the state made the full payment on a level-dollar schedule), though the figure would be lower and eventually negative in subsequent years, yielding “savings” (see Graphic 1). 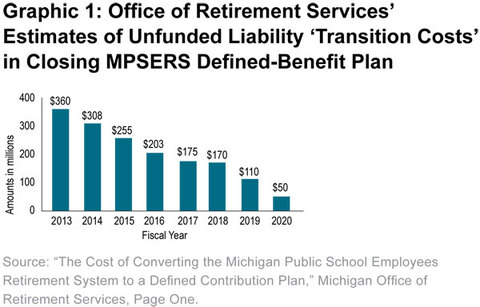 Below are five options for dealing with “transition costs.” If legislators would like to ensure that closing the system will not require additional cash in the near-term, they can consider all of the options below with the exception of option three. In option three, reasons are presented for why legislators could simply embrace these “transition costs” and make payments according to the level-dollar schedule. The five options are presented in order from the most comprehensive to the most limited reforms — and hence presented in the order in which the author recommends them.

There is a special consideration for policymakers interested in closing the MPSERS defined-benefit system in the near future. The fiscal 2012 state budget includes a special $133 million appropriation for the “MPSERS retirement obligation reform reserve fund.” A workgroup has been called to identify reforms to the pension fund and estimate the costs and savings of those reforms.[39] The money set aside could be used to reduce the size of the transition costs independent of the methods discussed below.