Michigan’s unemployment rate is currently 10.3 percent, and since 2000 per-capita personal income has fallen 4.4 percent after adjusting for inflation. The state’s economy has contracted by 7.1 percent in the last decade, and the number of people employed in the private sector in this state has fallen more than 19 percent over the same period.

However, despite these declines, public-sector employment has fallen only 6.7 percent since 2000, while government employee compensation levels in the state have increased. In response, legislators are now working on bills that would restore some balance, including scaling back the very generous fringe benefits that have been granted over the years to state, local government and public school employees. In fact, bringing these benefits into balance with private-sector averages could save Michigan $5.7 billion annually.

Not surprisingly, some of these government employees are complaining. In the words of an Associated Press item this week, many feel “under attack” because of the proposed changes to their benefits.

Unfortunately, the story offers no context by which readers can judge for themselves the validity of the complaints. Using information from the Mackinac Center’s “Helpful Facts About Michigan’s Public Sector,” that shortcoming is rectified below.

The AP describes a 59-year-old retired teacher who says she might “rethink” telling students to go into the field, which she characterizes as having gone from “noble” to “beleaguered.” AP paints the portrait as follows:

Sue Taylor loved being a Spanish teacher for 32 years, but she's not sure she'd do it again as she watches the benefits of seniority, untaxed pensions and collective bargaining being stripped away by Republican legislators in Michigan.

The average salary for Michigan public school teachers has risen for 13 consecutive years, to $63,445 in 2010. Including benefits, average total compensation far exceeds $90,000 per employee. Public school teachers contribute on average just 4 percent toward their health insurance premium, vs. on average 21 percent in the private sector, and about 25 percent for federal employees in Michigan. Typical public school health coverage also costs 47 percent more than private-sector levels. From 2000 to 2010, the average benefits per full-time classroom teacher rose by 37 percent, even after adjusting for inflation.

Michigan public school employees get a defined-benefit pension that they can start collecting at age 55 after 10 years on the job. This costs taxpayers some $1,500 per student, up 25 percent since 2000 in real terms. Most teachers are contractually obligated to work 185 days per year, whereas the average private-sector work year is about 245 days.

Across Michigan, teachers, state government workers, university employees, police and firefighters are struggling to hang onto the protections they've had in the past. Bills have been introduced to end binding arbitration for disputes between first responders and local governments, require all public workers to pay at least 20 percent of their health care costs, limit the issues on which teachers can bargain and make at least some portions of the state right-to-work areas where workers covered by union contracts could choose not to pay union dues.

Individuals employed by this state receive wages and benefits worth $94,686 on average. Government employee health insurance benefits exceed private-sector averages by $7,149 more per year. Retirement benefits per public-sector employee cost $11,725 more per year than in the private sector.

This chart illustrates how Michigan government and private sector wage and benefits have diverged since 2000:

Graphic: Growth of Michigan Wages and Benefits Since 2000 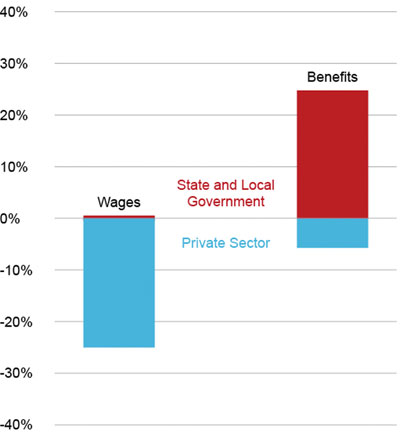 The article quotes several government employees and union bosses who express belligerence toward the proposed bills and their sponsors:

"[Legislators have] overreached, and we're going to hold them accountable for the decisions they're making," said Ray Holman of United Auto Workers Local 6000 (which primarily consists of government employees).

The evidence over the past decade suggests that it’s the government unions that have overreached in their demands, seeking and getting more than a rapidly shrinking private sector can provide. The legislation that is advancing in the state Legislature would actually make very modest adjustments to this imbalance. Government employees in this state would still be doing far better on average than their neighbors who work in the private sector.

Jarrett Skorup is a research associate for online engagement at the Mackinac Center for Public Policy, a research and educational institute headquartered in Midland, Mich. Permission to reprint in whole or in part is hereby granted, provided that the author and the Center are properly cited.