This category captures the expenditures for central financial and business operations, such as disbursements, budgeting, payroll, accounting, data processing, and planning and research of long-term goals. Also accounted for are such human resource functions as staff development, recruitment, evaluation and training.[31]

In 2010, the city locale group spent $692 per pupil on other support services — 74 percent more than the amount spent in the suburban locale group, which had the second-highest level of such spending (see Graphic 23). The rural locale group, however, produced the largest per-pupil spending increase on other support services from 2004 to 2010: 18 percent. The other three major locale groups also increased spending in this area over this period — by around 10 percent in the city and town locales, and by 2 percent in the suburban locale.

Of the 12 subgroups, the remote rural subgroup and DPS increased per-pupil spending on other support services the most, by 38 and 33 percent, respectively. These expenditures also increased significantly for the midsize city (29 percent), remote town (26 percent) and small suburban (24 percent) subgroups. Large suburban districts cut spending by 1 percent on average, and distant town districts did so by 4 percent on average. After generally declining since 2004, DPS’ expenditures in this category rose substantially in 2010, and that year DPS spent at least twice ($1,250) what any of the other 11 locale subgroups did in per-pupil expenditures on other support services.[*] 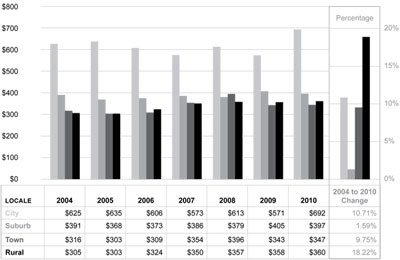 From 2004 to 2010, the greatest increase in spending on other support services as a portion of operational expenditures occurred in the remote rural subgroup: 15 percent. The distant town subgroup, in contrast, decreased this portion by 15 percent. Among the 12 locale subgroups, DPS spent the largest portion of operating expenditures on other support services in 2010 (8 percent), while the smallest portion was spent by the small suburban subgroup (3.5 percent).[†] 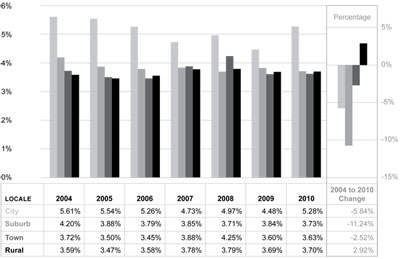