This includes all expenditures related to transporting students to and from school. Compensation for supervisors, bus drivers, monitors and mechanics fits here, as do expenses for vehicles, fuel and equipment. This category can also include subsidies that schools pay to parents to transport children to and from school.[30] 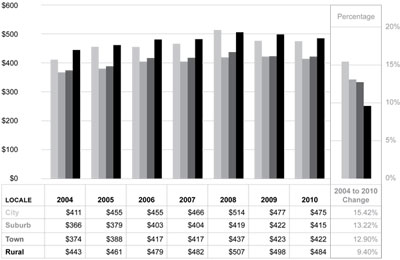 In 2010, the rural group devoted a larger part of its operational spending — 5 percent — to student transportation than did districts in the other locale groups (see Graphic 22). In three of the four major locale groups, the proportion of operational expenditures spent on student transportation decreased from 2004 to 2010; the portion in the town group remained essentially the same.

Among the subgroups, the midsize city subgroup decreased this transportation share the most — an 18 percent decline. The remote town subgroup increased the portion of operational expenditures dedicated to transportation by 9 percent between 2004 and 2010, the largest percentage increase of any locale subgroup.[‡] 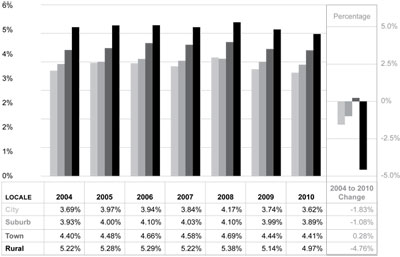