This category includes spending for district-level management, such as the expenses associated with boards of education, superintendents and other executive administrators, and community, state and federal relations services. Spending on legal services, union negotiations, elections, tax assessments, public relations and seeking and applying for state and federal grants are accounted for here.[25] 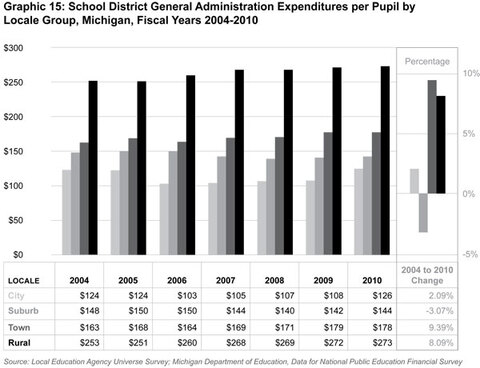 Within the 12 subgroups, the midsize city subgroup reduced per-pupil spending on general administration the most from 2004 to 2010 — expenditures dropped from $128 to $102, a 20 percent decline. The midsize city subgroup also spent the least of the subgroups by this measure in 2010. DPS increased general administration spending per pupil by 46 percent from 2004 to 2010, the most of any subgroup. The fringe town and remote rural subgroups also significantly increased this per-pupil spending, by 13 percent and 16 percent, respectively. The remote rural subgroup spent more per pupil ($402) than any other locale subgroup.[*]

General administration makes up a relatively small portion of district operational spending in all locale groups — less than 3 percent for the four major locale types (see Graphic 16). The portion of districts’ operating expenditures consumed by general administration decreased for city, suburb, town and rural locale groups from 2004 to 2010. Suburban districts averaged the largest decrease — about 15 percent. Among the subgroups in 2010, the remote rural subgroup devoted the largest portion of operational spending to this category (3.8 percent), while the midsize city subgroup spent the least, at less than 1 percent. Only DPS increased the portion of its operating expenditures dedicated to general administration (12 percent) from 2004 to 2010.[†] 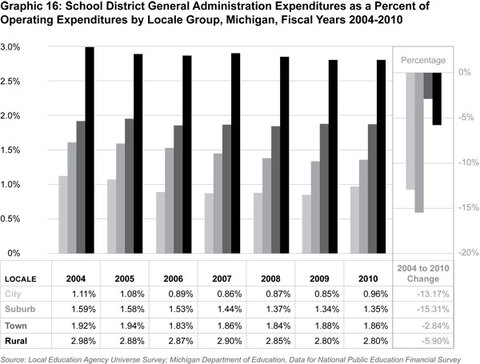