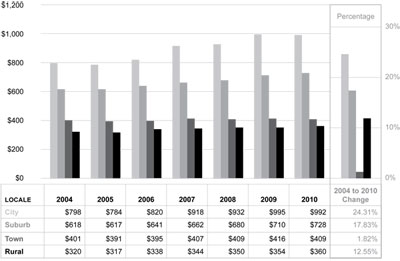 There are also large disparities when comparing student support services spending as a percent of overall operational expenditures. For instance, in 2010, spending on student support services in the city locale group consumed about twice the portion of operating expenditures that it did in the rural group (see Graphic 12). Plus, from 2004 to 2010, this portion grew by 6 percent in the city locale group, but only because DPS’ share increased by 24 percent; the midsize and small city subgroups spent smaller shares at the end of the period. In fact, many of the locale subgroups dedicated a smaller portion of their operating expenditures to student support services in 2010 than they did in 2004.[†] The town locale group saw the largest decrease by this measure, dropping by about 10 percent, with the remote town subgroup decreasing by 17 percent.[‡] 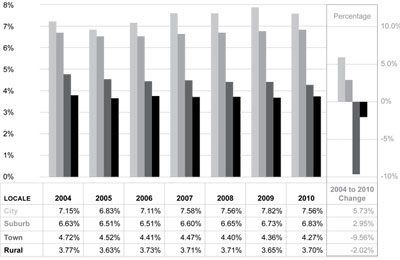 [‡] See Appendix B, Graphic 38. It is difficult to ascertain what might account for these large differences. Based on the type of service being provided, one might expect to find higher levels of spending for student support services in districts with large proportions of low-income students. This hypothesis does not correspond with the relatively lower levels of spending in rural districts, however.