Expenditures for instruction are defined as “activities directly associated with the interaction between teachers and students.”[20] These include total instructional employee compensation, textbooks and other supplies, and any other purchased instructional services. Compensation for state-certified regular, special, preschool, vocational, alternative and substitute teachers consumes the vast majority of this expense category.[21]

Since instruction expenditures are typically the largest single portion of a district’s operating budget, and since city school districts had the highest operating expenditures on average, it is not entirely surprising to find that the city locale group spent the most per pupil on instruction from 2004 to 2010 (see Graphic 9). In fact, city school districts had the highest average spending for many of the 10 spending categories discussed in this study.

Instructional spending per pupil grew by at least 15 percent in all four of the locale groups from 2004 to 2010. This per-pupil instructional spending increased the most in DPS, with almost 26 percent growth, while the distant town subgroup had the smallest increase (14 percent) among the 12 subgroups.[*] The city locale group spent at least $1,000 more per pupil on instruction expenditures than the other major locales in 2010. 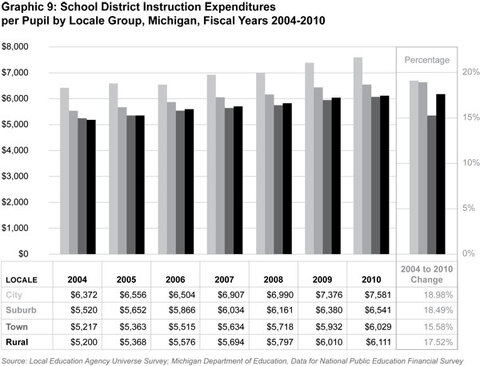 Even though the city locale group spent more per pupil in absolute terms, it devoted a smaller share of operational spending to instruction. Among the four major locale groups, the town and rural groups allocated the largest share of their operating resources to instruction — about 63 percent in 2010 (see Graphic 10). In 2010, distant town districts allocated the most on average (63.2 percent), and DPS allocated the least (54.8 percent).[†] From 2004 to 2010, the suburban group produced the largest growth (3.5 percent) in the portion of its operational spending devoted to instruction, and the midsize suburban subgroup led all locale subgroups with a 4 percent increase. Only DPS decreased (3.4 percent) the share of its operating expenditures dedicated to instruction.[‡] 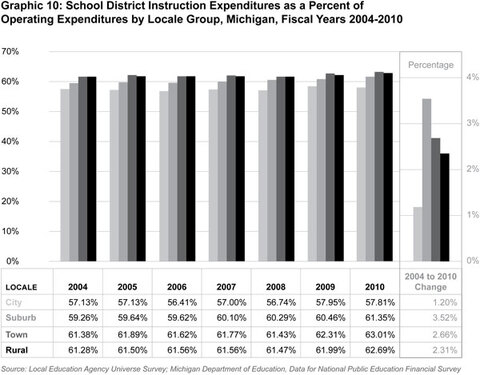