As noted above, operating expenditures (or current expenditures) are those made by a district to carry on most of its daily activity. They include spending on personnel, materials, equipment, transportation and energy. It should be noted that spending on personnel involves all employee compensation, including wages, employee insurance benefits and employer contributions to employee pension plans.[19]

DPS led all 12 locale subgroups, logging operating expenditures of about $15,570 per pupil in 2010. The fringe and distant town subgroups had the lowest operating expenditures, averaging about $9,500 per pupil in 2010.[*] Even excluding DPS from the city locale group, city districts on average still spent at least $1,600 more per pupil than the other three major locale groups in 2010.[†] 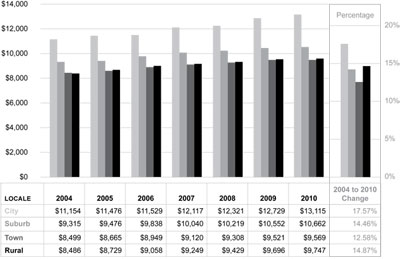