Unlike per-pupil local funding, state funding per student from 2004 to 2010 did not change much for any locale group (see Graphic 5). The suburban group received more per-pupil state funding in 2010 than in 2004, an increase from $6,767 to $6,943, or about 3 percent. City, towns and rural locale groups all experienced slight declines. Remote town and remote rural subgroups experienced the largest percentage decrease in state funding per pupil among the 12 subgroups from 2004 to 2010. Per-pupil money from the state dropped by 9 percent for remote town subgroups and 11 percent for remote rural subgroups.[†] 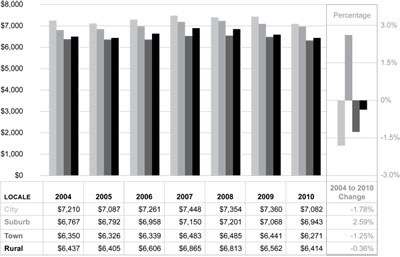