Beating a self-imposed deadline by five days, the Michigan Legislature has passed a state budget with many notable spending cuts and an overall tax cut. The most significant and far-reaching change was to eliminate the Michigan Business Tax, replacing it with a much less complex and burdensome 6 percent Corporate Income Tax.

In addition, the state’s misguided policy of using the tax code to pick economic winners and losers will be greatly scaled back.  As Mackinac Center Fiscal Policy Analyst James Hohman wrote, “The law makes Michigan more competitive nationally and limits a substantial piece of the burden government places on the state’s job providers.”

But politics generates hyperbole, as seen in the following statements claiming school spending reductions were enacted to deliver a business tax cut that “won’t guarantee” any job creation:

Measuring the specific economic effects of any tax cut is an imprecise science at best, but the question the Legislature tried to answer really comes down to this: Should more money be given to government bureaucrats in Lansing or to private business owners?

Related, if the Legislature had instead put more money into public education, as they have been doing for many decades, do these individuals guarantee better educational outcomes?

The evidence suggests that it does not, as seen in the following graph assembled by Mackinac Center adjunct scholar Andrew Coulson: 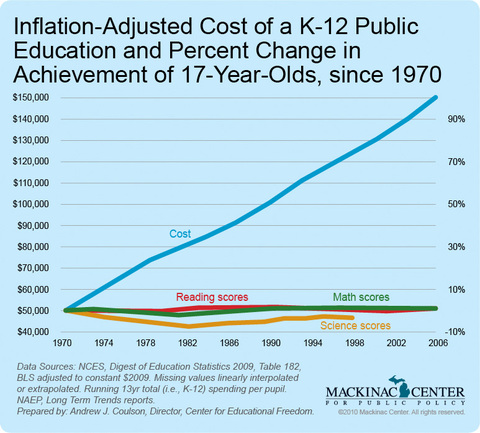 While these are the numbers for education spending nationally, narrowing this down to the state of Michigan does not change the results. As noted by Mackinac Center Education Policy Director Michael Van Beek, “The per-student operating cost of Michigan's public schools nearly quadrupled from 1960 to 2007, from $2,991 in 1960 to $11,337 in 2007, as measured in 2007 dollars.” 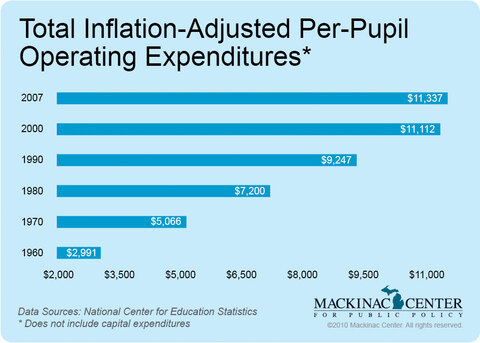