Structural Overspending in Michigan’s State Budget: One Way to Fix It

(Editor’s note: The following is an edited version of a speech delivered by Mackinac Center President Joseph G. Lehman at the West Michigan Policy Forum in Grand Rapids on Sept. 16, 2010.)

It’s an honor to address the group and a delight to connect with Mackinac Center friends and supporters. Congratulations to the Grand Rapids Chamber. Your decision to establish this annual forum three years ago fills a real void in the policy debate. There’s never been a better time for fresh perspectives.

Perspective can make all the difference. I hunt deer with our three young sons and our daughter. Circumstances have conspired against the middle boy, Stephen, who is now 12. He’s the only brother who has never been with Dad when we’ve actually gotten a deer. So I take Stephen out with me even more than the other boys.

Last year’s hunt with Stephen was an entire day that started and ended in darkness, inside a cramped, smelly deer blind, in weather that was even bad for November. We didn’t even see one deer that day. My one-word description for the day would have been “miserable.”

On New Year’s Day I asked everyone in the family if they could remember the best thing that happened to them in the last year. The only answer I remember is the one Stephen gave. He said, “Dad, I think it was that one day I got to spend the whole day with just you in the deer blind.”

Stephen’s perspective changed the way I’ll look at a bad day in the woods from now on.

Perspective matters. For instance, tax-funded universities might have a perspective that causes them to see more of the upside of tax-funded programs than the downside. Maybe that’s why we don’t see reports coming from those universities that include lists of low-priority government programs that might be shut down or taxes that could be reduced. So when the Mackinac Center produces that kind of report, we believe we’re filling a real void.

I used the term “structural overspending” in the title of this talk because it points us toward one way to get the state’s budget back in the black. It might make as much difference as there is between a miserable day in the woods and the best day of the year.

The Mackinac Center has recommended hundreds specific ideas to save the state more than $2 billion a year. Most of them involve getting government out of certain activities, or eliminating costly privileges to certain groups. I won’t list them here, but the conference organizers will send you an e-mail that includes a link to one of our papers called “101 Recommendations to Revitalize Michigan.”

After we published this pamphlet, we found one idea bigger than all of them combined. This idea does not require eliminating a single government employee or program. It’s an idea that appeals to the idea of basic equity. And it could save $5.7 billion a year.

Let’s look at it. 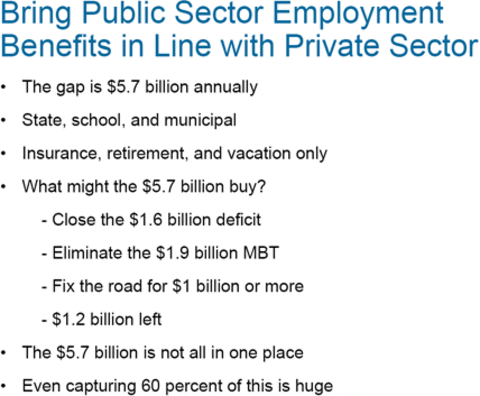 How did the gap get so big? The reason is due to what I call “compound monopoly.”

Let’s examine what we know about monopolies: first, as the sole provider of a product or service they have the ability to keep out competitors; second, they are known for high costs, low efficiency, unresponsiveness and low quality.

In this assessment, the first description aptly describes government. The second description captures the essence of unions.

Combine these two types — a government employee union — and you have a compound monopoly.

These powerful constituencies will oppose the $5.7 billion savings plan. But they’ll have to argue they deserve better insurance and pensions and vacations than the people they work for.

Why is this idea worth pursuing? That answer to that question is A Tale of Two Willies. 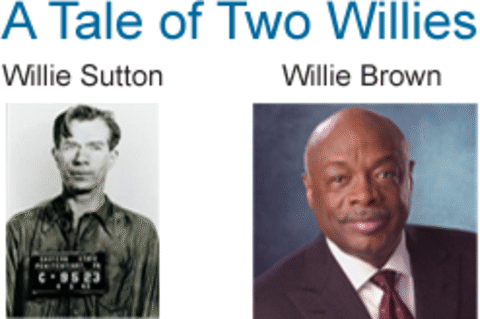 The man on the left is legendary bank robber Willie Sutton, who is famous for something he may or may not have said. When someone asked him why he robbed banks, he reportedly responded, “Because that’s where the money is.”

That’s one reason to pursue this $5.7 billion in savings. Employee benefits are simply where the money is in state and local government. At least in the sense that there may be no more achievable, necessary and fair way to trim $5.7 billion in one fell swoop.

The man on the right is Willie Brown. He’s the famous former mayor of San Francisco and speaker of the California State Assembly. It would be hard to identify a better friend of government spending and unions in general.

But even Willie Brown knows the political winds are changing. I’m going to read something he wrote last January for the San Francisco Chronicle that I couldn’t have said any better myself.

“The deal used to be that civil servants were paid less than private-sector workers in exchange for an understanding that they had job security for life.

“But we politicians, pushed by our friends in labor, gradually expanded pay and benefits to private-sector levels while keeping the job protections and layering on incredibly generous retirement packages that pay ex-workers almost as much as current workers.

“Talking about this is politically unpopular and potentially even career suicide for most officeholders. But at some point, someone is going to have to get honest about the fact that 80 percent of the state, county and city budget deficits are due to employee costs.”

Perspective on government matters. Is government sort of a Swiss Army knife with infinitely elastic capacity to add new blades and tools to fine tune the economy? Or is it more of an umpire that enforces basic rules and sets a framework for play, but otherwise stays out of the way of the players?

If government is a Swiss Army knife, then we’d better start working harder in the private sector to pay for all the new government we’re going to need. But if it’s an umpire, the state’s going to have to get its fiscal house in order.

All of us on the panel agreed on the phone a few weeks ago that Michigan doesn’t have any problems that another million new jobs wouldn’t solve. I would argue that state government can do a lot more to prevent the creation of a million jobs than it can do to create those jobs. Especially when the battery jobs the governor touted last week are subsidized to the tune of $113,000 apiece.

The more state government can’t live within its means, the harder it will be to create jobs here.

Let’s take a look at some data that will shape the policy, and the politics, of saving this $5.7 billion.

Chart one shows the difference between Michigan’s public and private sector wages and benefits. 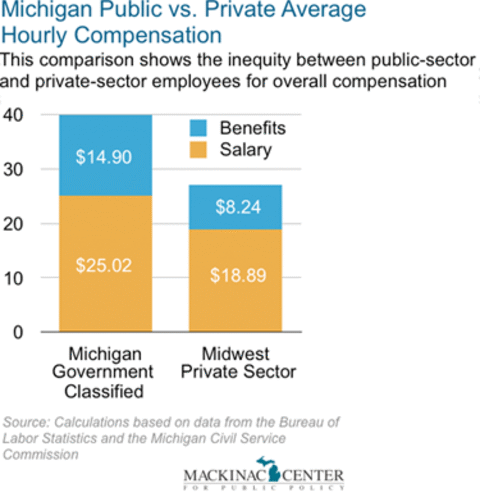 As you can see, the gap in hourly benefits is a difference of $6.66.

We’ve had to make some assumptions because of disparate data. We believe our assumptions are defensible. But our methodology is open to review on our website, or we will send you our calculations.

Now I’d like to show you some trends that will be important in understanding how we got here, and how this idea could have political appeal.

Michigan’s government wages have been increasing much faster than in the private sector, and this trend has only been exacerbated in recent years. 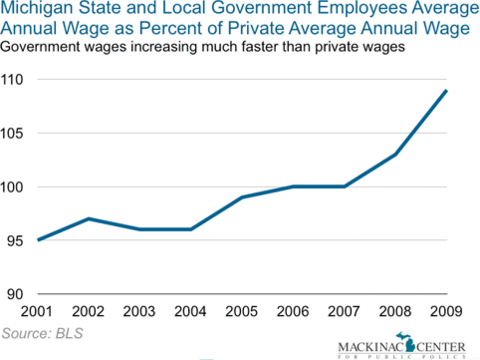 The next chart shows that the wages and benefits of a state employee now cost taxpayers more than $93,000 a year. 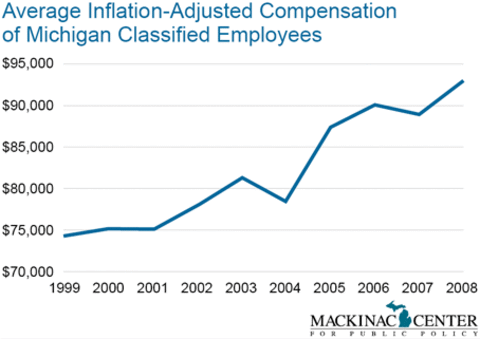 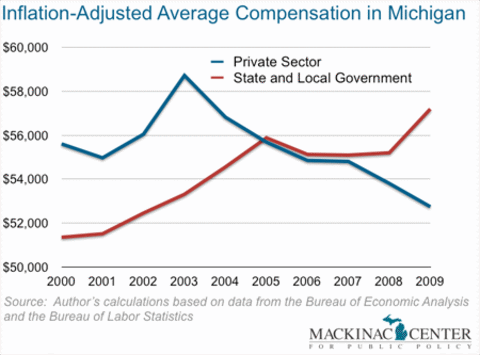 This chart shows that government jobs in Michigan make up a larger percentage of the economy than they did a decade ago. 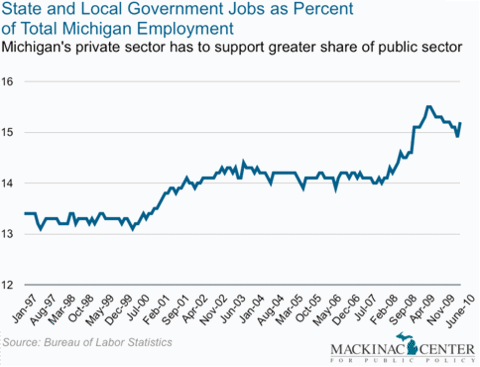 And here you can see how the government class was also protected in the recent recession. 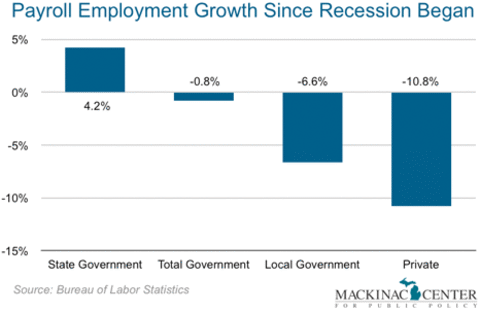 I’m showing you this chart because it illustrates so perfectly how good the public-sector unions are at increasing funding for their constituencies in the face of a declining overall economy. So we have our work cut out for us. 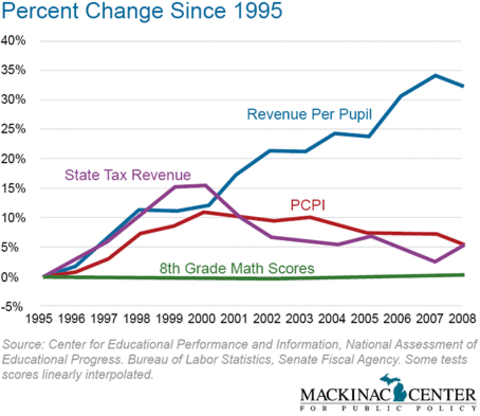 The $5.7 billion in savings is spread through multiple levels of government. Unions have built fortresses around these benefits via hundreds of collective bargaining agreements, the Public Employment Relations Act, various pension acts, court decisions and maybe even the Constitution. It’s hard to imagine a single bill that could capture all $5.7 billion.

We should be under no illusion that bringing equity to public and private employment benefits will be politically easy. But the gap grows worse each year, and the public is more open than ever to ideas that couldn’t have been advanced three years ago. And we know that what can’t continue forever, won’t.

The Mackinac Center is developing a blueprint for capturing the $5.7 billion, or as much of that amount as possible. We’ll be presenting it to the new governor and Legislature, but most importantly to the public. We invite your support and input along the way.

Good ideas and solid data are not inherently persuasive, especially in politics. That’s why it’s important to make the strongest possible case for equity and fairness at the same time. It’s simply not right or fair to have a government that spends too much to do things it’s not good at while protecting a privileged class of government employees who expect their private-sector neighbors to provide them deluxe health and retirement benefits.

Joseph G. Lehman is president of the Mackinac Center for Public Policy, a research and educational institute headquartered in Midland, Mich. Permission to reprint in whole or in part is hereby authorized, provided that the author and the Center are properly cited.