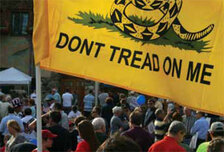 It's not your father's protest movement. Everyone from small children to military veterans wave the Stars and Stripes and the coiled snake of the Gadsden flag, symbols of the Tea Party message: I'm American — so don't tread on me.

But it takes work to turn these broad principles into focused action. As Paul Kersey, Mackinac Center labor policy director, said in speeches to two Tea Party rallies: "Government is so big, so intrusive, and so complicated that you need trained professionals to really grasp how messed up the whole thing is. That's where we come in." Thus, on April 15, as Tea Party groups across the nation gathered to protest ever-expanding government and budget deficits, Mackinac Center policy analysts spoke at nine of the "Tax Day" rallies in Michigan to encourage and inform the crowds, giving them the tools to make a real difference.

Center staff were also on hand at these and many more rallies across the state to distribute thousands of copies of such Mackinac Center publications as Michigan Capitol Confidential, "Tea Party Toolbox" and "101 Recommendations to Revitalize Michigan" — which Tea Partiers then carried proudly in Mackinac Center "Freedom makes all the difference" bags.

Emphasizing the importance of keeping politicians accountable, Center speakers focused on the central question of how to limit government. Each alerted the crowds to many examples of "misbehavior" on the part of Lansing politicians and told them the best way to keep tabs on what their representatives are up to: reading the Mackinac Center's daily news site, www.MichCapCon.com.

Kathy Hoekstra, Mackinac Center communications specialist, starred at the rally held on the steps of the Capitol building in Lansing. Speaking to a crowd 1,500 strong, Hoekstra pointed out the "bad habits of democracy" — that is, the people forgetting to hold their representatives accountable. She encouraged her audience by letting them know how easy it is to hold their legislators responsible:

Kersey spoke in Hillsdale and Brighton. He highlighted the dangers of union special-interest lobbying, explaining how public-sector collective bargaining can even override local law and gave the facts on the state's forced unionization of home-based day care providers.

Jack McHugh, the Center's legislative analyst, spoke in Lapeer and Sterling Heights and at a seminar in Lansing. He also emphasized government accountability and told of the many tools the Mackinac Center offers to help individuals stay informed: Daily political news (MichCapCon.com), plain-English descriptions and complete roll call votes of every single bill in the Legislature (MichiganVotes.org), and checkbook registers from municipalities and school districts (Show Michigan the Money).

Mackinac Center Fiscal Policy Director Michael LaFaive spoke at a rally in Midland and at the seminar in Lansing. In his speeches, he focused on Michigan's unemployment and outmigration statistics. These, he said, show the failure of Michigan's big-government, high-tax policies and the need for a new strategy: limited government and tax cuts.

Ken Braun gave a rousing address in Hudsonville. Elliot Gaiser, a Hillsdale College student who attended and spoke at the Hudsonville rally, commented: "The crowd was very enthusiastic and heartily applauded each of the speakers, including Ken Braun. His comments were taken very well. It was remarkable how large the crowd was on a Thursday at noon for a smaller community like Hudsonville."

That's the Tea Party movement: thousands of ordinary people refusing to let the routine demand of daily life prevent them from rallying against a profligate government. Mackinac Center analysts are offering them practical ways to achieve the greatest impact possible. With ideas, energy and know-how, we can help restore America's founding principles of personal responsibility and limited government. 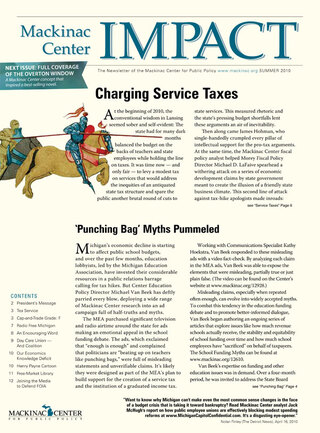