The Sales Tax and Lottery Myth

(Editor's note: This is the sixth in an ongoing series examining school funding myths.)

School officials often complain (and the media repeats) that funding for Michigan's public schools is "unstable" because it relies in part on revenue from the 6 percent state sales tax. Additionally, many people seem to think that a significant proportion of the money going into our schools comes from the Michigan Lottery.

In fact, over the last 15 years, even though the proceeds from the sales tax and lottery have increased, the portion of total school revenue from both has steadily decreased. In 1995, they contributed 32 percent and 5 percent, respectively. In 2010, it's forecasted that they'll make up just 21 percent and 3.5 percent.

Misperceptions about the magnitude of the Michigan Lottery's contribution may arise because the operation markets itself as a significant source of school revenue. Part of the strategy behind its $27 million annual advertising budget is to convince people that gambling away their income really isn't so reckless given that their loss is education's gain.

The marketing includes giant yellow billboards declaring that $15 billion has been dedicated to public schools thanks to the public's gambling ways. What the signs don't reveal is that this amount is the total cumulative contribution over 36 years! This is not to say the lottery is a bust, just that it doesn't provide as much as many believe.

The sales tax myth is also common and deeply rooted. One reason is that a 50 percent sales tax rate hike was a key component of the Proposal A school funding overhaul adopted by voters in 1994, with 100 percent of the new revenue (and 60 of the revenue from the original 4 percent levy)  going into the state School Aid Fund. All told, 73 cents of every dollar paid in sales tax goes to schools.

School board members and officials perpetuate the myth when they express frustration at having less control over their revenues than they did before Proposal A. An oft heard complaint during the difficult process of crafting annual local school budgets is that the state controls funding levels and relies heavily on the sales tax.

Like many good myths, there's more than a grain of truth to this one. Forty-one percent of all state-based revenues for schools in 2009 came from the sales tax. Although the proportion from other state sources is growing (the income tax, Michigan Business Tax and the 6 mill state education property tax), the sales tax still remains the largest single revenue source for state-based school funding. However, the proportion falls to just 21 percent when all school revenue sources are considered, including money from local property taxes and the federal government. 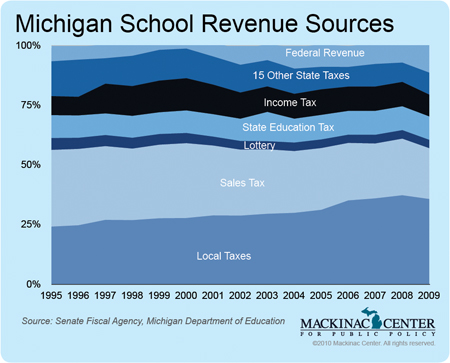 Indeed, federal money represents an ever-growing share of school budgets over the last decade. The amount has almost tripled since 2000, rising from $890 million to $2.46 billion in 2009. Likewise, local property tax revenues also grew by $900 million from 2004 to 2009  (the net increase may be less going forward due to depressed real estate values).

Finally, school officials should be grateful for state-based sources of revenues like the sales tax. The current funding system has produced relatively predictable and stable income, vastly different from the pre-Proposal A era when when school districts were forced to devote extensive resources to passing uncertain operating-fund millages to keep their doors open. Instead of complaining about their lack of control of revenues, school board members should make it a habit to focus on the things they can control — like their district's expenses.