(Editor's note: This is the fourth in an ongoing series examining school funding myths.)

The Michigan Education Association and other groups seeking more money for public schools frequently claim that the current funding system is "unstable." Several factors may make it appear so, but the reality is that school revenues have proven remarkably stable.

Michigan is not unique in this; over the past century school funding nationwide has advanced in one direction — up.  James Guthrie, director of Vanderbilt University's Peabody Center for Education Policy analyzed this trend and found its source in state constitutional provisions, decentralized administration, employee unions and other special interests, and the existence of multiple revenue streams.

All these factors are at work in Michigan, starting with the state Constitution, which proclaims that education "shall forever be encouraged." Probably the most influential factor in recent decades is school employee unions, which have succeeded in making Michigan's teachers the highest paid in the nation relative to the population that supports them. In both local school board and legislative elections, the unions marshal tremendous manpower and financial resources for candidates who promote their members' interests, and against those who don't.

Schools here are also highly decentralized, though most operational funding for 551 local districts and 57 intermediate school districts is determined by the state's "foundation allowance" system, under which a large proportion of revenue comes from state sources instead of local property taxes. Local school officials sometimes express frustration at the system's limits on their power to increase millage rates, but it has provided a remarkably steady revenue stream over time.

In the 1994-1995 academic year, all schools received at least $5,912 per pupil (measured in 2009 dollars) through the state's funding system. By 2009-2010, that minimum had grown to $7,151. The annualized increase had been even higher when funding reached an all-time high of $7,751 (in 2009 dollars) in 2001-2002. An inflation-adjusted 7 percent decline since then is one of the factors that can make funding seem "unstable." But in real, inflation-adjusted terms, the minimum per-student funding level from this source is still up 21 percent since the inception of this system (and other sources - primarily federal money - have helped many districts make up the difference since that peak funding year). 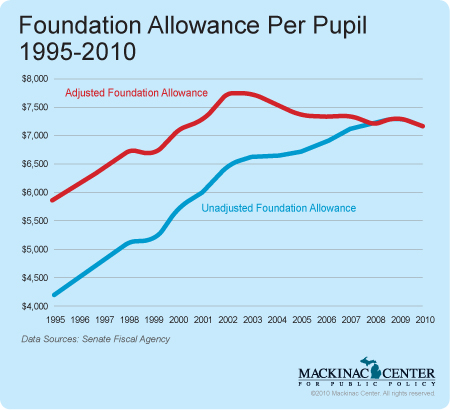 Prior to 1994, 80 percent of school revenues came from local property taxes. In a 2004 report, the Senate Fiscal Agency noted the new funding system's elimination of one source of instability: "(T)he reliance on the often unpredictable nature of millage elections to determine the districts operating revenue ... has been virtually eliminated and a more stable source of revenue exists."

That source is an annual state government infusion of some $11 billion. More than half this amount comes from earmarked income and sales tax receipts; the rest comes from a six-mill statewide education property tax, lottery revenue, businesses taxes, tobacco taxes and several other taxes.

While local property tax revenues traditionally were viewed as very stable, they are expected to decline significantly over the next several years and probably won't rebound for a decade. The vast majority of school districts have benefited from the broad base of the taxes that support the state's contribution to their funding.

Other aspects of the school funding system create a perception of instability. For instance, a large portion of a district's funds are tied to enrollment, and conventional districts have experienced a 9.3 percent decline in enrollment over the last seven years.

Furthermore, the fact that local districts must finalize their budgets by a June 30 deadline, while the state Legislature isn't required to set its portion of school funding until Oct. 1, generates more uncertainty. Even worse, "rosy scenario" legislative overestimates of state tax revenues have forced modest 1 to 3 percent mid-year school aid cuts several times in recent years. Fortunately, schools have fund balances to make up the difference and many have been able to use that money to prevent midyear layoffs or program cuts.

Finally, union contracts that lock in rising labor costs limit districts' ability to cope with midyear cuts, declining enrollments and various hard-to-project cost increases. Rather than attempting to get stubborn unions to yield concessions, districts find it easier to lay off staff and cut programs, furthering the illusion of instability.

Revenue that is 100 percent predictable and stable is an impossible dream, for schools or anyone else. Under any possible system, school funding is ultimately tied to the economic well-being of the state. Local school officials should focus on managing what they can control - expenses - and refrain from contributing to the myth that they're "victims" of unstable funding.

Michael Van Beek is education policy director at the Mackinac Center for Public Policy, a research and educational institute headquartered in Midland, Mich. Permission to reprint in whole or in part is hereby granted, provided that the author and the Center are properly cited.