DATA FROM THE National Cancer Institute shows that death rates from cancer in Michigan, like those of the United States, are trending slightly downward.[1] Yet, only two Michigan counties are reported to have met objectives set by the Centers for Disease Control for reducing cancer mortality.[2] Diet, exercise, heredity and exposure to pathogens continue to be identified as major causes.[3] While efforts to address such risk factors are of great importance, new research from the University of Michigan is seeking a potential cure for cancer that focuses on the life and death of individual cancer cells.

Yvonne L. Kapila, an associate professor at the University of Michigan Department of Periodontics and Oral Medicine, is the senior and corresponding co-author of "Receptor-Interacting Protein Shuttles Between Cell Death and Survival Signaling Pathways."[4] Her work at U of M includes her present research as well as teaching in the University's dental school and treating patients at a community dental clinic. Her husband, Dr. Sunil Kapila, is chairman of the Department of Orthodontics and Pediatric Dentistry at U of M.

The object of Yvonne Kapila's research is to find a finely targeted treatment for cancer that harnesses an understanding of how the receptor-interacting protein (RIP) works at the cellular level to kill cancer cells. The present study of RIP is an outgrowth of her doctoral and postdoctoral work at the University
of California-San Francisco.

While exploring the effects of periodontal disease on gum and bone tissues, Kapila studied the extracellular matrix (ECM) of which these tissues are partly comprised. She describes the ECM as "the stuff cells live in."

ECM serves many functions, including providing support and anchorage for cells, separating tissues from one another, and regulating communication between cells. Kapila cites collagen as a relatively well-known protein in the ECM, due to its prevalence in the human body and use in cosmetic surgery.

According to Kapila, collagen and other "ubiquitous proteins" formerly were regarded as the "amorphous ground substance" surrounding cells, but now, "the relationship between ECM and cells has taken on greater significance. This reflects a more modern and holistic view of how the body works."

Kapila's present research at the University of Michigan further explores the interplay between cells and the ECM, particularly with respect to the natural life and death cycles of cells. The hope is that by mapping out these processes, treatments can be developed to kill undesirable cancer cells without harming healthy cells.

Necrosis is cell death caused by trauma or injury. When a cell dies as part of a natural regenerative process, it is called programmed cell death or apoptosis. As Kapila explained, apoptosis results in the elimination of cells, but serves constructive purposes as well: "The interproximal spaces between the digits in a human hand are a product of apoptosis. Without apoptosis, the formation of the digits and other portions of the limbs would be incomplete. In fact, disruptions of apoptosis probably account for conditions in which there is webbing of the hands and feet."

In an average adult, billions of cells die each day through apoptosis. Since the 1990s, research concerning apoptosis has increased markedly and is revealing implications for an extensive variety of diseases, with cancer at the top of the list.

Kapila's latest research seeks a way to induce apoptosis in cancer cells through the introduction of a receptor-interacting protein. The key to making this happen lies in the process by which cells adhere to and separate from the ECM. Generally, cells must adhere to the ECM to survive. When a cell separates from the ECM
and dies, this is called anoikis.

As Kapila explained, some cells are not susceptible to anoikis: "Blood cells that fight infection move freely as part of the body's immune system. Likewise, cancer cells are able to attach and disconnect from the ECM. This attribute is part of what allows cancer cells to spread and metastasize so easily. This gives them quite an advantage over other cells and complicates prospects for treatment."

Kapila said that current knowledge does not provide a full explanation as to why cancer cells are different, but one theory is that they have "mutated due to exposure to toxins or other causes."

When cells adhere to the ECM, more is occurring than a mere structural connection. The attachment initiates "intracellular signaling pathways" that Kapila said allow the communication of instructions to the cell.

"The cell receives multiple signals, some of which tell it to live, and others which tell it to die," she said. "The RIP is involved in both cases. When it interacts with a cell death protein called FAS, the cell dies, and when it binds with a protein called FAK, the cell is told to survive and eventually duplicate a copy of itself. When we understand the particulars of this process, we will be that much closer."

To date, Kapila's team has modified RIP mechanisms experimentally in animal studies to attack squamous cancer cells. Squamous cell carcinoma may occur in many body parts including the skin, lips, mouth, esophagus, bladder, prostate, lung and cervix. It is the second most common form of skin cancer, and is caused by sun exposure.

This makes the present research both relevant and potentially useful. Early indications are that RIP mechanisms can trigger apoptosis in squamous cancer cells without harming normal cells. Kapila is pleased by the results, but cautions that the research is far from complete.

"We are a long way from saying that RIP can be used safely in humans," she said. "Ideally, one would hope to inject RIP in a carrier material and achieve the desired outcome. But on its own, RIP would not be able to distinguish a cancer cell from a good cell. More research has to be done to see which portions of RIP are suited for each cell function." 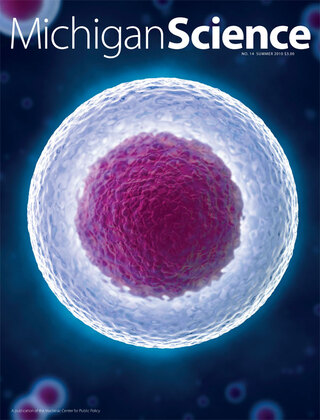