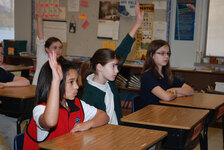 Nonpublic schools are generally reliant on tuition as a major funding source, followed by private donations and fundraising. But since the state economy has put a damper on endowment income and in some cases on private donations, and since raising tuition has diminishing returns, fundraising is becoming more important as well as more sophisticated.

"If they sit back and do nothing, then they'll close," Brian Broderick put the case bluntly. Broderick is executive director of the Michigan Association of Nonpublic Schools, an organization that works with its members on marketing and business plans, among other services.

"Urban schools are finding it increasingly difficult to keep the doors open because of the tuition-based model," Broderick said in a telephone interview with Michigan Education Report.

Families in Michigan today have less disposable income, and many have left the state altogether. Either scenario spells fewer tuition dollars for private schools.

In response, those schools are working both to boost enrollment and to raise more money through non-tuition sources, administrators told Michigan Education Report. That includes everything from bake sales to alumni-giving programs to general community outreach. A number of nonpublic schools also are sharing students with public schools.

None of that is news to Principal Timothy Kotyuk of Huron Valley Catholic School in Ypsilanti.

"We've had to dramatically step up our major fundraiser, and that's a dinner auction," Kotyuk told Michigan Education Report.

Enrollment at Huron Valley stands at 185 students in pre-kindergarten through eighth grade, but, "To be really viable, we need to be above 215," Kotyuk said. A new development committee has been tasked with building financial support from sources outside the school's 110 families.

Those families pay up to $5,050 in tuition per child and are required to dedicate 15 service hours to the school — five hours in the lunchroom, five hours assisting the auction, and five hours in another service of their choice. The school also sponsors a myriad of fundraisers in which families are expected to participate.

The system works because the families are committed, Kotyuk said.

"If I had a lot of turnover, it wouldn't work as well," he said.

Tuition accounted for about 60 percent of income in 2008-2009, according to the school's annual report. Fundraising added about 15 percent, with donations earmarked for scholarships at 11 percent, at-large donations were 10 percent, and smaller categories made up the remainder.

About 81 percent of private school students attend a religious school, according to the latest NCES Private School Universe Survey.

Schools that are members of the Michigan Association of Christian Schools report that about 60 percent of income comes from tuition, while about 40 percent comes from fundraising and affiliated churches, said executive director Tim Schmig.

"We have a number of parents who will work a second job to keep their children in a Christian school," Schmig told Michigan Education Report. "That's the kind of sacrifice we see parents willing to make."

Most member schools are working to increase revenue from non-tuition sources, he said. For example, "We have businessmen who will pay for scholarships for kids to attend Christian schools."

Businesses play a large role at Cristo Rey Academy in Detroit, too, President Mike Khoury said. In a unique program, every Cristo Rey student spends one day a week working at a local job arranged in advance between the Catholic high school and the business or organization. The money they earn goes toward their tuition.

"The key to our school being sustainable is the jobs program. We're at full employment," Khoury said. About 35 employers and 120 freshmen and sophomores are involved, and the program covered about 35 to 40 percent of the school's total expenses this year, he said.

Tuition assistance helps keep some families in nonpublic schools, as do tuition "caps" based on family income and reduced tuition for enrolling more than one child.

Requests for financial assistance are rising in the Archdiocese of Detroit, Superintendent Bernadette Sugrue said in a telephone interview. The archdiocese offers $600 in tuition aid per child at the elementary level and $700 at the high school level. Some individual schools also offer assistance, she said.

"It's harder and harder, because more families are applying for help, and when the money's gone, it's gone," Sugrue said. In some cases, parents must decide whether to spend money on elementary tuition, high school tuition or save it for college.

"There are families, given this economy ... who have to take a reality check," she said.

The archdiocese currently is home to 80 elementary schools and 22 high schools. Enrollment has dropped by 8 percent since 2005-2006, she said, with decreases ranging from 3 to 5 percent in each of the last three years. The decline is greater at the elementary level than in high schools, according to Sugrue, and higher in the city of Detroit than in the suburbs.

NO STIMULUS IN PRIVATE SECTOR

Statewide, the number of nonpublic school students decreased by about 17 percent from 2005 to 2009, going from approximately 158,000 to approximately 130,000, according to data submitted by schools to the state's Center for Educational Performance and Information. The number of nonpublic schools decreased from 931 to 820 during the same time period.

While the federal education stimulus filled much of the gap in public school budgets in Michigan over the past two years, the same cannot be said for private schools. The lion's share of stimulus money — about $1.1 billion — went to public schools through the state's per-pupil funding mechanism.

A smaller amount of stimulus dollars went to federal "Title" programs that are intended to serve both public and nonpublic students and teachers, including services for disadvantaged students and for teacher professional development. Nonpublic schools are not required to participate in those programs, but in schools with high populations of disadvantaged students, the funding can play a significant role, Broderick said.

To the extent that stimulus dollars increased those funds, eligible private schools may have benefited. As of 2007, however, a national assessment of the Title I program for disadvantaged youth showed that only about 1 percent of all recipients were private school students.

"A lot of it is contingent and reliant on how much time (it takes) and how much administrators are aware of it," Broderick said of nonpublic school participation in federal funding programs.

In other cases, schools make a deliberate choice not to accept federal funding because it requires accepting the federal mandates that accompany the money.

"We have never accepted one dollar of federal money or Title I or state money," Schmig said of the members of the Michigan Association of Christian Schools. "On principle, we feel that's the worst thing we could do. We really prefer to be left alone."

While 15 states and the District of Columbia have programs that offer some form of vouchers, scholarships or tax incentives that make private schools a viable choice for more parents, Michigan does not.

Even as they work to add revenue, schools also are attempting to protect and even boost enrollment. One strategy is to enroll more preschoolers.

The Academy of the Sacred Heart in Bloomfield Hills announced in April that it will reduce tuition for its infant, toddler, preschool and primary school programs in 2010-2011 in hopes that once parents enroll at the school, they'll remain.

Similarly, Huron Valley opened a preschool two years ago as a way to build its own feeder program, Kotyuk said.

"It's already borne fruit, because we had a full kindergarten this year," he said. "Without that stream, we're not seeing growth in the middle school."

Eric VanDerhoof, administrator of Midland Christian School, told Michigan Education Report that he doesn't expect a major increase in enrollment even if the economy improves. Families just aren't having as many children, he said, and there is competition for limited students not just between the public and private school sectors, but within those sectors.

That means that nonpublic schools are looking for ways to attract students by setting themselves apart, Broderick said.

"They're trying to show how they're distinct. The main distinction is the faith-based component they offer," he said.

At Midland Christian, officials decided several years ago that adopting a classical Christian curriculum would be advantageous to students — with the side effect of becoming a marketing tool. Today the school's Web site identifies it as: "Mid-Michigan's Only Classical Christian School."

"There is a question: How can we set ourselves apart and do better? There's a niche in classical Christian education," VanDerhoof said.

Budget cuts also are on the table in private schools.

"Starting salaries at private schools are already lower than public schools," VanDerhoof told Michigan Education Report. "When salary is 80 percent of your budget, you look at no raises. There were no raises this year, but we're considering them next year."

At Huron Valley, "We've not had to lay off any teachers, but we've frozen wages for two years and other benefits have been reduced," Kotyuk said. The school has cut back from two sections each of sixth, seventh and eighth grade to just one, with staffing levels reduced through attrition.

Also this spring, two Catholic high schools in Grand Rapids announced that they will share a principal and possibly other staff and teachers beginning this fall. Grand Rapids Catholic Central and Grand Rapids West Catholic each reported nearly half a million in unpaid tuition, according to The Grand Rapids Press.

Meanwhile, about 73 percent of the members of the Michigan Alliance of Nonpublic Schools said in a survey that they participate in shared-service arrangements with public schools, Broderick said. Under these arrangements, public schools may provide instruction in non-core classes, such as band and art, to private school students.

According to data collected by the Center for Educational Performance and Information, nearly 2,900 nonpublic students were included in public school enrollment counts in the spring of 2009. (That number is a full-time equivalent, not a headcount. Home-schooled students who take courses at public schools are also included in the total.)

While the number of participating students has remained at about 2,900 since 2007, the percent of Michigan public schools reporting at least one nonpublic school student has increased from about 25 percent to 27 percent during that time period, the records show.