A revelation during a Michigan Senate committee hearing last week is drawing some new connections to the mechanism that enabled some 40,000 home-based day care owners to be categorized as public employees and unionized. There are indications that some of the so-called dots that need connecting may include the Granholm administration and Lt. Gov. John Cherry.

At the heart of this story is the Michigan Home-Based Child Care Council (MHBCCC), a state entity created as a result of an "interlocal agreement" (ILA) between the Michigan Department of Human Services and Flint-based Mott Community College. The MHBCCC then became the so-called "employer" against whom home day care providers were unionized by the AFSCME/UAW-bred Child Care Providers-Together Michigan (CCPTM). (The CCPTM does not have an operational website, but information can be found on the Michigan AFSCME website)

At an April 20 appropriations subcommittee hearing on human services, legislators posed questions to Lisa Brewer-Walraven, a high-ranking DHS representative who happens to serve as an MHBCCC board member. Brewer-Walraven was asked by committee chair Bill Hardiman, R-Kentwood, about her knowledge of the Council, its purported benefit to the state's day care owners and providers and the MHBCCC's relationship with Mott Community College, given the nature of the interlocal agreement.

Brewer-Walraven insisted the council's executive director attends early education meetings at Mott and regularly "interfaces" with Mott representatives. Hardiman said he had  information quite to the contrary.

Hardiman probed further, asking who started talks about forming the interlocal agreement with Mott. Brewer-Walraven's answer, that the DHS approached Mott about the proposed ILA, was quite revealing.

This answer is mostly consistent with information obtained by the Mackinac Center. Early in our investigation into this case, we submitted written questions to Mott Community College. Our questions included one along the lines of that asked by Sen. Hardiman: Who approached whom in asking Mott to be a party to this interlocal agreement?

Here was the answer we received:

In late 2005, Lt. Gov. John Cherry phoned MCC President Dick Shaink to discuss impending federal welfare reform legislation that would have a large impact on child care needs in Michigan. Due to MCC's national reputation in Early Childhood Development and its track record of collaboration with various community partners, LTG Cherry asked if MCC would be willing to become involved in training child care providers. In December 2005 or January 2006, Dr. Shaink met with Dan Hodgins, (then) Coordinator of MCC's Early Childhood Development Program. Hodgins confirmed the situation described by Cherry and Shaink agreed to continue discussions.

It would seem logical that Lt. Gov. Cherry would have Mott Community College at top of mind, as he hails from Genesee County, also home to Mott. But that's not all. Mott provided further correspondence that confirms key figures from the Granholm administration were involved as well. Here is Mott's response to our question about the number of meetings Mott officials had with representatives from the state about Mott signing off on the interlocal agreement with the DHS:

The Mackinac Center obtained a copy of an e-mail to Mott's president that names several of the above-mentioned parties who were to take place in a conference call regarding the MHBCCC formation, as well as questions Mott prepared for that call: 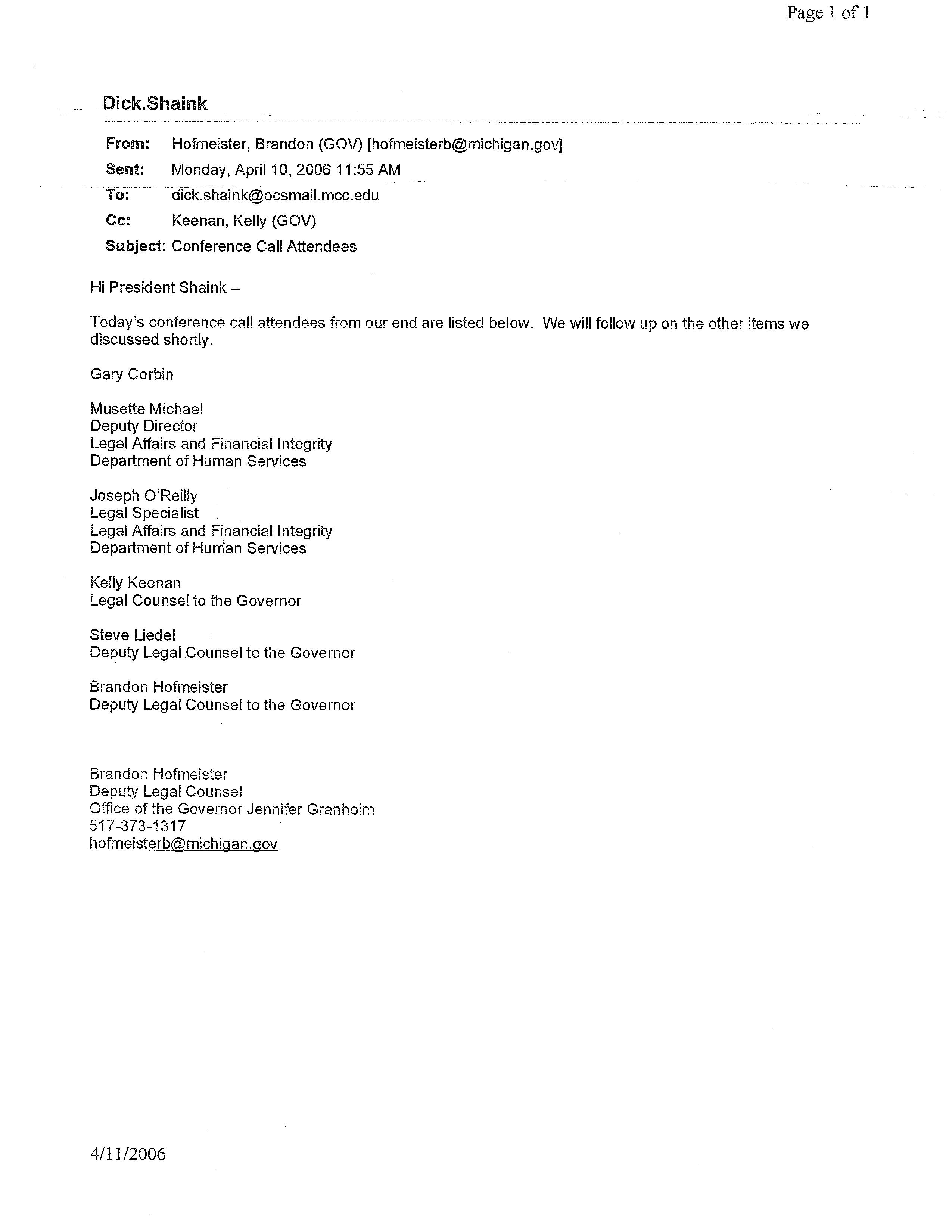 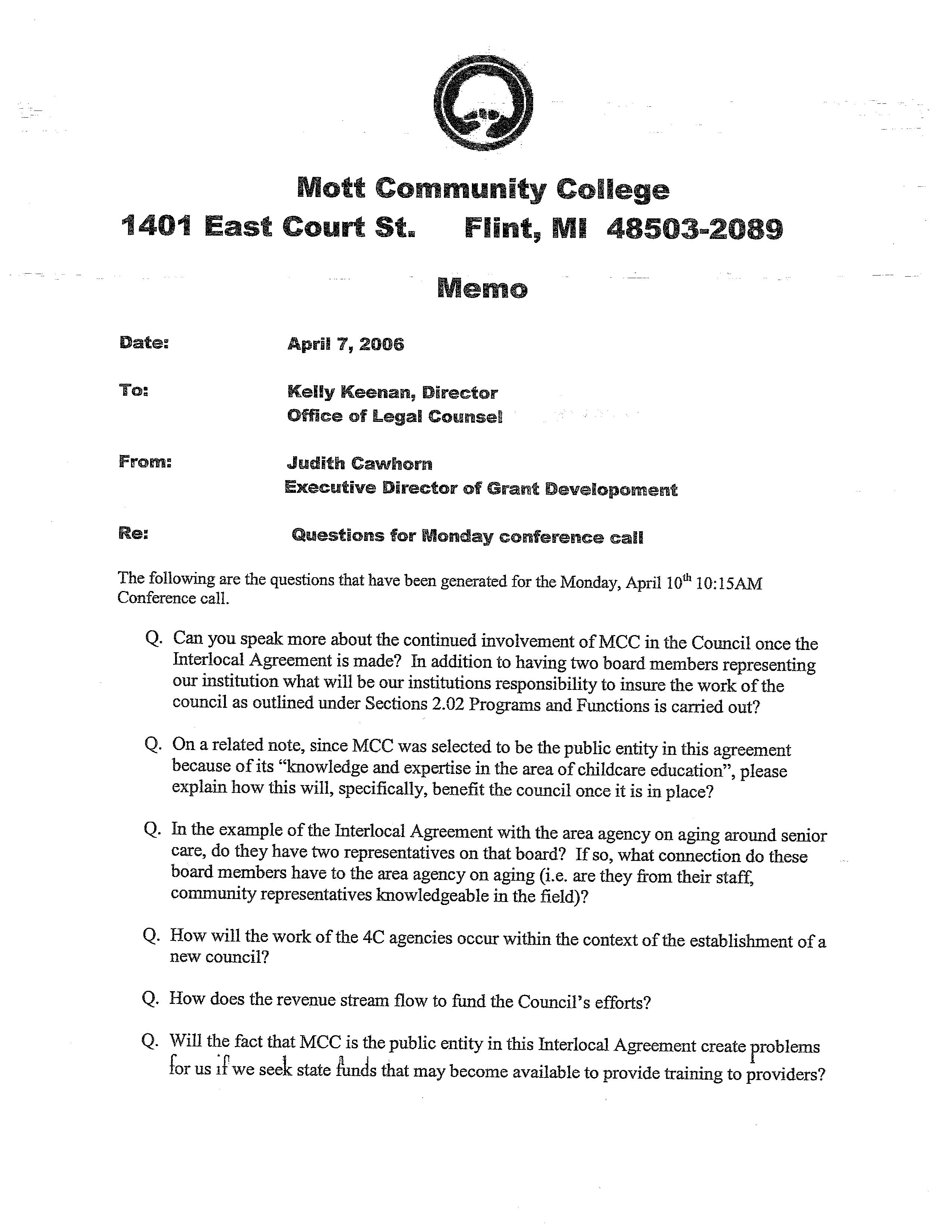 I followed up with Lisa Brewer-Walraven to clarify her answer to Sen. Hardiman, that the DHS approached Mott about becoming party to the interlocal agreement. She verified her answer, but would not name names nor answer any other related questions, citing the pending "litigation" (referring to the Mackinac Center Legal Foundation's lawsuit against the DHS over the stealth unionization of home day care owners and providers.) At a town hall forum held at Mott last night, Brewer-Walraven's boss, DHS Director Ishmael Ahmed, also cited litigation as a reason for not answering MHBCCC-related questions.

If the DHS refuses to answer questions, perhaps a recent appointee to the Mott Community College Board of Trustees can help. Pam Faris was sworn in as trustee in February to replace a retiring member. If the name does not ring a bell, her husband's might. She is married to Lt. Gov. John Cherry, and according to the biography on the state's website, served on the board of the Early Childhood Investment Corporation (ECIC). The ECIC, incidentally, is one of the early childhood resources upon which the MHBCCC considers a resource for its work, and was also created via interlocal agreement. The ECIC executive committee, (of which Faris was a member) included discussion of the MHBCCC and the child care providers' union in a 2008 meeting:

"Other discussion points included training for service groups, quality rating systems, licensing requirements, the Michigan Home-Based Child Care Council and new home-based providers' union, Child Care Providers Together Michigan, and the need for the Executive Committee to be more engaged with policymakers throughout the state."

These are just a few connections that seem to point to the Michigan Home-Based Child Care Council. As these dots become clearer, and the connections stronger, the questions will no doubt become tougher to avoid.