Bill would put all charter teachers into state retirement system 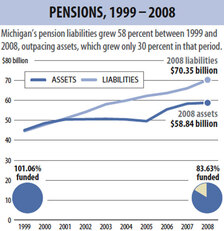 Taken from a recent report by the Pew Center on the States, this chart shows that Michigan’s state pension fund liabilities have grown faster than assets. This chart combines the pension and health care funds, and also combines state and public school employees.

Some in the Michigan charter public school community are keeping a wary eye on a proposal to require all charter school teachers to join the state retirement system.

But charter teachers who are employed by a third party under contract to the school, such as an education service provider, are not enrolled in MPSERS. About 70 percent of the 4,000-plus charter school teachers in Michigan fall into that category, according to Gary Naeyaert, vice president of public relations and legislative affairs with the Michigan Association of Public School Academies.

That doesn't mean the teachers don't receive retirement benefits, he said, but that the benefit plans are offered through their third-party employers, not by the state.

State lawmakers currently are debating changes in MPSERS designed to bring down retirement costs to participating schools. Barring any reform, school districts this fall will have to pay an amount equal to about 20 percent of payroll to cover pension and health care benefits for current and future school retirees.

Gov. Jennifer Granholm has proposed requiring employees to pick up a larger share of their own retirement costs, thus reducing the cost to school districts, an idea that has gained statewide media attention.

Less publicized is a provision in the House version of the reform that would expand the definition of public school teacher as of July 1, 2011, and effectively sweep all charter school teachers into MPSERS regardless of their employer. Supporters say that adding more employees to the system would help stabilize the funding.

A Senate bill on retirement reform originally included the charter teacher switch as well, but that language was removed by the Senate Appropriations Committee before it passed the measure last week.

Meanwhile, the House Committee on Oversight and Investigations cancelled a meeting on the bill originally scheduled for March 30.

While MPSERS needs to be reformed, forcing charter teachers into the mix as a way to boost membership would not help, Naeyaert said, and also would take away an element of choice from both teachers and public school academies.

"It's a dead-end train, and we just want to stay off it," Naeyaert said of MPSERS.

MPSERS net assets declined by 11.7 percent in fiscal year 2009, following a nearly 19 percent decline in 2008, both times due to investment losses. Those losses mean that schools must contribute more in subsequent years to keep the fund financially sound.

A recent report by the Pew Center on the States suggests that Michigan needs to address the gap between the amount of money set aside and the level of benefits promised by MPSERS.

"Financially, I don't see how adding our teachers is going to help save the system," Naeyaert added. MPSERS' current membership consists of about 172,000 retirees and beneficiaries, and nearly 283,000 active members, according to the State Budget Office.

"We allow our schools to set up the benefit package that fits their school," Kauppi said. "They (the packages) are tailored to what their budget can afford."

"Right now, it's a choice," she pointed out. Charter schools can hire their own teachers and enroll them in MPSERS, or can contract with an outside provider for teachers and offer benefits through that provider. Those who contract with a third party typically offer 401(k)-style retirement plans, she said.

Right now, MPSERS is a defined-benefit plan, meaning school employees are guaranteed a certain pension benefit when they retire, based mainly on years of service and salary at the time of retirement.

"Obviously it's a benefit," Kauppi said of the MPSERS program, "but if it (the cost) is going to close their school, then they aren't going to have a job. So there's a balance there."

Naeyaert pointed out that if the proposed reforms are adopted, the state would switch to a "hybrid" model that is partly a defined-benefit and partly a defined-contribution plan along the lines of a 401(k). Charter teachers would be in the hybrid plan.

In addition to increasing the employee share of retirement contributions, Senate and House lawmakers are discussing legislation that eliminates dental and vision insurance subsidies for current employees retiring after Oct. 1, 2010, but increases pension benefits for eligible employees retiring before that date.

In all, the proposed reforms would save public schools an estimated $6.4 billion over 10 years, according to the State Budget Office, though the Senate Fiscal Agency puts the estimated savings at $2.9 billion over 10 years. The Senate Fiscal Agency analysis assumes that fewer teachers would opt to retire and predicts lower savings on replacement wages.