Dove Academy: The end goal is a college degree 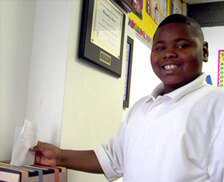 David Harper, a third-grade student at Dove Academy, was sent to the office for being “caught” in a show of good character.

It's a busy morning at Dove Academy in Detroit when third-grader David Harper walks into the central office, half-sheet of paper in hand.

"I want you to tell this person what you've done," she says.

A visiting reporter winces, anticipating a confession of poor behavior and the likely consequences.

But young Mr. Harper has not been sent to the office for a violation of student conduct. He's been sent because he's been caught in a show of good character. 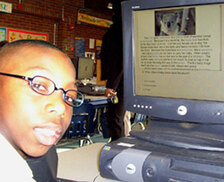 Fifth-grader Mario Buthia works on a report on koalas. Dove students memorize not only their high school graduation year, but their college graduation year as well.
More images …

It appears that he was discovered not talking in class when nobody was supposed to be talking, but most were. For that good behavior, he was written up and sent to the office to collect a small prize.

Being caught by a Dove "CIA" agent — CIA stands for Character in Action — is the kind of thing that bodes well for Harper's college days. Yes, this third-grader and his classmates are already thinking ahead to college.

Dove is the first school in Michigan to join the California-based "No Excuses University Network," a group of schools that emphasizes college-readiness at very early ages. Now active at 70 schools in 13 states, "No Excuses" has two core principles: that every child has the right to be prepared to attend college, and that adults who operate schools have a responsibility to prepare them.

In practice, that means that "No Excuses" schools are expected to create a school culture in which going to college is the norm, and in which students are academically ready to do so.

"We introduce college to the students at an early age," Doctor said as she walked through the charter public school's hallway, where the greens, golds, maroons and blues of Eastern Michigan, Notre Dame, Kentucky State, Alabama, Saginaw Valley, Michigan State and other universities hang above classroom doors.

On Fridays, students are allowed to dress in their adopted college colors, Doctor said. The youngsters memorize the year they will graduate from college and recite the "college-bound pledge" during morning announcements.

But hanging colorful banners isn't enough to get kids into college, agreed No Excuses founder Damen Lopez in an interview with Michigan Education Report.

Known in public education circles for his work as a teacher and principal in San Diego, Lopez founded the No Excuses University Network in 2004 to promote college-readiness as part of the elementary school culture. In 2006 he co-founded TurnAround Schools, which works with districts to improve student performance through six key academic strategies.

Those are: a belief that children can learn, collaboration among teachers, standards alignment, assessment, data analysis, and strategic academic intervention.

Dove was already in a strong academic position when it joined the No Excuses network, Lopez said, but went from "good to great" by adding the college-readiness focus. High school graduation can't be the end goal for students anymore, he continued.

"A college degree is the ticket into the game. Dove is in the heart of one of the most challenging areas of our country. You realize the only hope these kids have is education."

Dove has been named a "Beating the Odds" school by the Michigan Department of Education,  a recognition given to schools that demonstrate high academic achievement among students from lower socioeconomic backgrounds. The academy is chartered by Oakland University and is one of three Michigan charters schools managed by Schoolhouse Services and Staffing.

Proficiency rates on Michigan Educational Assessment Program tests went up in seven of 10 categories at Dove from 2008 to 2009, a result that Principal Frank Nardelli attributes to the No Excuses approach.

The school has seen the same upward trends on other assessment tests and on student report cards, Nardelli said in a telephone interview with Michigan Education Report.

Asked for an example of how joining No Excuses has changed Dove's daily operations, Nardelli described the way the school works with students who need academic help.

Previously, he said, certain students were pulled out of their classrooms during the day for targeted assistance, a common practice in schools, but one that causes the students to miss out on the instruction taking place back in the classroom.

"They were never able to really recover," Nardelli said.

Now, the entire student body receives targeted instruction for the same 40 minutes each day. Students meet in groups according to their academic strengths and weaknesses, which means that lower-performing students get the help they need while higher-performing students can work on advanced academics, Nardelli said. Students can shift from group to group as they master different skills.

"We utilize all of our staff," he said. "We flood each grade level with support staff during this time."

Working with outside experts or mentors is not a new idea in public education, but has gained fresh attention in Michigan recently. In Detroit Public Schools, emergency fiscal manager Robert Bobb hired four educational firms to work with 17 low-performing high schools in the district.

Meanwhile, Michigan's new Race to the Top legislation created a system in which low-performing schools could be turned over to an educational management firm.

The well-known KIPP school network also emphasizes college-readiness, and the University Preparatory charter system in southeast Michigan operates under a "90/90" promise — 90 percent of students will graduate from high school and 90 percent will be accepted into college.

"There are lots of things going on in public education that we can learn from," Lopez said. "I think we (No Excuses and TurnAround Schools) have a very strong way to support public education in a very cost-effective way."

Schools are not charged dues or fees for being members of the No Excuses network, he said, and don't have to purchase training or follow-up materials. Schools join the network by sending staff teams to introductory institutes where they learn the No Excuses strategies.

Enrolling at Dove can be an eye-opener for students, Doctor said, since "I can't" or "I don't want to" aren't acceptable reasons for not doing one's work.

It's also not acceptable for the teachers and administrators to believe that children can't achieve, she added.

"All these kids cannot be 'poor' or 'unskilled,'" she said. "We have to change our perspective of how we view the kids. ... If we say in November, 'I can't do anything with them,' then we've got a problem, because we're here until June."