At a press conference Tuesday announcing several new recipients of discriminatory state tax breaks granted by the Michigan Economic Growth Authority, Gov. Jennifer Granholm repeated a number of false or misleading statements about this state government's policy of picking winners and losers, and its effects as a substitute for genuine labor, regulatory and tax law reforms.

Gov. Granholm: "First of all, what everybody needs to remember is that these are all performance-based, that we would not be paying a credit if it were not for the fact that the company's going to be hiring people. If they don't hire the people, they don't get the credit."

Gov. Granholm: "The studies demonstrate that the return on the investment is far greater than the tax credit that is given."

Score: False. There are no such "studies." There has not been any systematic, independent research demonstrating that MEGA tax breaks create jobs or improve the economy. The independent research that does exist shows the credits either have no effect or actually generate declines in employment. MEGA's "parent," the Michigan Economic Development Corporation, has not even attempted to rebut these studies.

Gov. Granholm: "The people who are hired pay income tax; there is a spinoff effect. So the benefit of having these incentives, as you can see from today, these would not happen if not for these incentives."

Score: Irrelevant. What matters is the net effect of the program — whether it creates more jobs than it costs. The existing research indicates that it does not.

Gov. Granholm: "Every state is doing it." 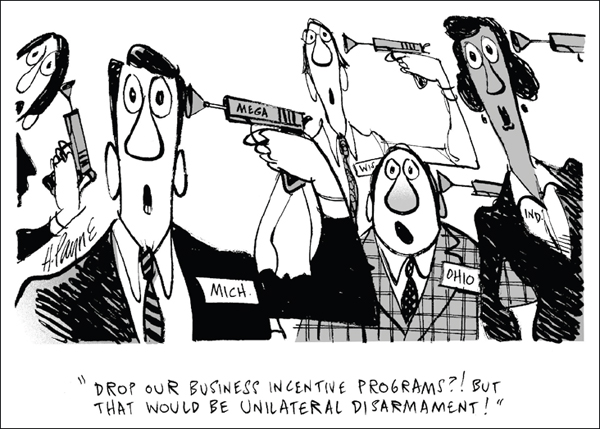 Score: False. The decline in Michigan tax revenues is due to overall economic decline fueled by state government having adopted policies that make firms located here unable to effectively compete with ones in other states. In fact, Michigan's tax system has shown itself to be more resilient than other states'.