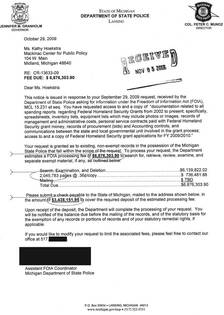 $6,876,303.90, to be exact. That's what the Michigan Department of State Police is charging for documents that I requested via the Freedom of Information Act regarding the state's handling of federal homeland security grant money from 2002 to present (see image at right). This is definitely a record for Mackinac Center FOIA requests. In fact, this may be a record for any FOIA request. Even the $3,438,151.95 down payment seems likely to be a speck above the average FOIA asking price.

I submitted the request in September based on information revealed in a 2008 report by the Office of the Inspector General of the homeland security grants awarded during fiscal 2002-2004, as well as state monitoring reviews (these FOIAs cost a mere $235.90). The inspector general spot-checked only seven counties and found several problems with the administration of $129 million in federal grant money, including the following:

My follow-up FOIA requested documentation related to all spending reports regarding federal homeland security grants from 2002 to present, including spreadsheets, inventory lists, etc. The Department of State Police, which handles the homeland security grant program in Michigan, informed me that there are 2,045,783 such pages. It is not clear at this point how many of those two million pages documented federal grants from 2002 to 2004, but apparently they weren't enough to keep track of $129 million.

If just one state-run federal grant program generates more than 2 million pages of material, it's no wonder the program cannot be effectively administered. The scope of government becomes clear when an agency that represents a small sliver of the bureaucratic pie expands to such a mind-boggling scale.

On the bright side, we could solve the state's budget problems with 284 more FOIA requests.