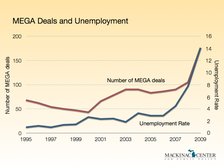 This chart might be called the "Political Class Desperation Index." The need for transformational reform of Michigan's tax, spending, labor and regulatory environments is indicated by the skyrocketing unemployment rate. The failure of the political class to buck special interests — including government employee unions — and finally undertake those reforms makes its members increasingly desperate to create the appearance of "doing something." Thus the massive increase in futile picking of winners (and losers) for receipt of discriminatory tax breaks and subsidies. These create diversionary "feel good" stories for local newpapers, but do nothing to reverse the state's economic decline — and may even accelerate it. ("MEGA" is the flagship program of Michigan's bureaucratic "economic development" empire.)

BTW, someone might argue that an accelerating pace of targeted tax break and subsidy issuance is evidence of the political class being responsive to economic decline. That is belied by the fact that the highest priority right now for most of its members is figuring out a way to pass new tax hikes.