At the same time, parents who choose to move their children from a traditional public school to an alternative school are moving from a system that costs the state roughly $5,500 per student to a system that costs the state fifty to ninety percent less (depending on the point of time in the UTTC phase-in period). Even when fully phased in, a tax credit of fifty percent of the average public school per-pupil revenue will save the state of Michigan (and therefore Michigan taxpayers) thousands of dollars for each student that migrates to an alternative school.

When the reduced state revenue and reduced state expenses are combined, the model shows that the UTTC plan would have a significant positive effect on state finances. Figure 4 shows the overall net effect. Under the current system, per-pupil state expenditures grow from under $10 billion to almost $14 billion. Under the UTTC plan, state expenditures still increase, but at a significantly slower rate. When these expenditures are added to the revenue loss, the total impact is still substantially less in each year than under the current system. By the time the UTTC is fully implemented, the taxpayers would be spending about a half-billion dollars less each year: $13.1 billion versus $13.7 billion in 2008. This would amount to a total savings to Michigan taxpayers of over $3.4 billion in the first ten years alone and over $550 million each year thereafter. 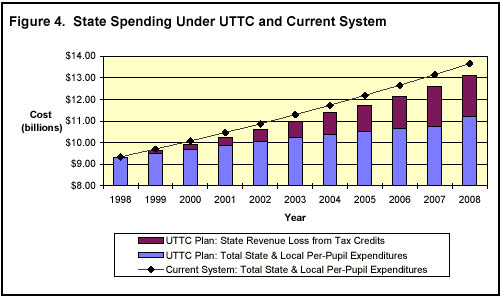 The UTTC avoids undermining the tax base of local units of government and would not distort the financing of individual school districts whose residents decided to support students in other districts. Since the UTTC is integrated into the existing state finance system for local schools, each district would still be guaranteed the same foundation allowance as it would under current laws. The large majority of tax credits would be claimed against the state income tax and state Single Business Tax, which would not affect local tax collections. To the extent residents of a district took tax credits against the 6-mill State Education Tax, which is a state property tax collected by the local school districts, the state would simply increase—dollar for dollar—the amount it provided the school district for its foundation allowance. Each school district would retain the same amount of per-pupil funding it has under current state laws, regardless of how many or how few of their residents claimed tax credits, or where the students sponsored by the residents attended school.

For other local units of government, there would be no direct effect on their tax base. The tax credit can be claimed only against state taxes.

Indirectly, the UTTC would strengthen the economic and tax base of all units of government. First, by encouraging better education for the majority of children who would remain in traditional public schools and allowing all parents to choose the very best school options for their children, the UTTC would help the economy grow through a better-educated citizenry. Second, although less important, the overall positive effect on the state budget would mean hundreds of millions of dollars in net savings. These savings could be used to lower taxes on businesses and individuals, address other budget priorities, or provide additional educational resources.