State to schools: Think outside the classroom 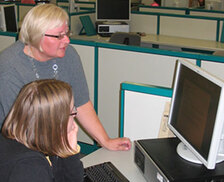 Ronalyn Arseneau, left, works with student Tammy Annala at a new computer in the N.I.C.E. Community School District. The district wants to develop an online academy with a neighboring district and open it to traditional high school students as well as alternative education students, home-schoolers and adult education students.

About a week into the school year, teacher Carol Cox asked her students what they thought of "Consumer Economics" class so far.

To respond, the juniors and seniors had to log on to the class Web site, locate the discussion forum, post a written comment and then log off. So far so good, most of them reported. 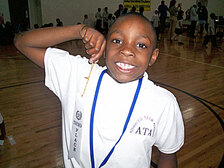 A student beams at his award-winning performance at the Advanced Technology Academy, a public charter school in Dearborn.

As the year goes on, these students will learn about keeping a checkbook, filling out tax returns, paycheck withholding and basic economics. They will be expected to read material online, listen to Cox's podcasts and watch videos related to their coursework. They also will be expected to complete and post assignments online, while tests are taken in person at Westwood High School.

For her part, Cox will keep a virtual eye on their progress by reading their comments, checking their assignments, managing online presentations and posting reminders or feedback. Students who want to see her in person can still find her at the high school every day.

As the teacher who developed the course — now only offered online — she said she sees firsthand the pros and cons of virtual school.

The biggest advantage is that online students have to take charge of their learning, Cox said. Students who don't read the text or turn in assignments in person aren't likely to fare any better online, in her experience. On the other hand, students who aren't likely to raise a hand in class often feel free to join a virtual discussion. Even better, the students can work on Consumer Economics when and where they choose, giving them a free hour to take a different class or, as many said, to sleep in.

"Most of the feedback I get from students has to do with responsibility," Cox told Michigan Education Report in a telephone interview. "Our plan is, over the next three years, to train teachers so they can put their material online in the same way."

'PROJECT RE-IMAGINE'
AND 'RACE TO THE TOP'

Eventually, the N.I.C.E. district would like to develop a virtual academy in conjunction with the neighboring Republic-Michigamme Schools to serve not only traditional high schoolers, but home-schoolers, alternative education students and adult education students in the community. That would take time and money, Superintendent Michael Haynes said, which is one reason the district has applied to become a "demonstration district" through Michigan's new "Project ReImagine" program.

Launched by the Michigan Department of Education this spring, Project ReImagine rests on the premise that Michigan needs systemic change in how it manages schools and delivers education. It challenged schools to suggest ways to improve student achievement with the same or less money: Think extended school day. Think online learning. Think performance pay. Think consolidating.

N.I.C.E.'s application is one of 71 received by the MDE. Twenty will be selected as demonstration districts. At a minimum, the state will help chosen districts begin to implement their projects by offering professional assistance and clearing bureaucratic obstacles.

The state department has $1 million in outside funding available to help chosen districts firm up their plans, but no money for implementation, according to Martin Ackley, director of communications.

"School districts ... were told from the beginning that their ReImagine proposals should be bold and district-wide, and developed with the understanding that they should be implemented at the local level regardless of funding," Ackley wrote in an e-mail response to questions.

It's possible, though, that demonstration districts could be in line for implementation dollars if Michigan receives a "Race to the Top" federal stimulus grant.

"Race to the Top" is a $4.35 billion competition which will award money to states based on their plans for education reform. Michigan's application will incorporate the ideas that demonstration districts have proposed.

"Race to the Top is an opportunity for us," Haynes said. "They (the state department of education) are looking for districts to make bold changes. We'd like to be out in front."

In N.I.C.E., an online academy is only one of many changes suggested in its 36-page proposal. They also propose a preschool, more project-based learning, dual college enrollment and an apprenticeship program with local businesses, plus a student testing program that pinpoints strengths and weaknesses quickly.

"I've got teachers and staff that are fired up about the potential," Haynes said.

'THE SCHOOL SYSTEM IS FLAT'

N.I.C.E. isn't alone in drawing up lists of what it could do differently. The state department received 71 official proposals from conventional public schools, public charter schools and intermediate districts. When partnering organizations are counted, the total number of entities involved is more than 350, according to information from the MDE.

One charter school applicant is the Dearborn-based Advanced Technology Academy. They submitted an application called "The School System is Flat."

The "flat" approach calls for communication and joint planning not only inside the school system, but between the school and parents, local businesses and area universities. The plan calls for developing Web space where everyone can "talk" virtually, according to Hannah Jorgensen, director of academics.

"We've already done many things outside the box," Jorgensen said. ATA participates in the Ford Partnership for Advanced Studies, a joint venture of the Ford Motor Company Fund and the Educational Development Center that publishes a curriculum focusing on business, engineering and technology.

This year ATA will become a "Next Generation Learning Community," which requires heavy involvement in the school by local business leaders and universities. The idea is to anticipate business needs and move prepared graduates into local jobs, with the side benefit of bringing university and business people into classrooms as guests and role models.

Elsewhere in Michigan, media have reported that Project ReImagine applicants would expand foreign language instruction to lower grades; group students by skills, not grade level; extend the school year; create "theme" schools; incorporate more technology as a teaching aid; and more. Many want to try "project-based learning," in which students learn by investigating problems rather than by having information given to them.

The state department is now reviewing applicants and will name demonstration districts "as early as possible in the fall," Ackley told MER.

If N.I.C.E. does receive additional money, most of it will go toward front-end needs like program development and teacher training.

It would be easier — and faster — to make changes if funding were available, Haynes said, but the district will move ahead regardless.