A New Review of the Data

For this study, we performed a review of MEGA's track record using recent data. In this case, we decided to focus specifically on job creation, including any jobs that might have appeared later than expected when the MEGA deal was first approved. Hence, we loosened the requirements for counting "successful" MEGA deals to include any companies that received credits, regardless of whether they met their original timeline. We also excluded retention credits, since these do not involve new job creation.[*] The resulting figures will allow us to directly compare MEGA's original job announcements and expectations with the actual jobs ultimately created at MEGA's recipient companies.

MEGA data shows that the authority has approved more than 500 tax credit deals since its inception in 1995. Of the MEGA packages meant to produce new jobs, 219 should have yielded sufficient jobs and investment to claim tax credits by 2009, since these deals were all concluded by the end of 2004, providing the companies a full five years since that time to claim the credits. It can be safely assumed that companies that have not claimed credits at this point will never do so.

These 219 deals were projected to produce 61,043 jobs. But of the 219 deals, only 122, or about 56 percent, led to companies receiving credits.[†] Ultimately, the 219 deals led to the creation of just 17,971 jobs. Thus, the actual job count was just 29 percent of the expected total — less than one-third. In effect, the initial job projections in MEGA news releases were more than triple the ultimate job creation, and to get a correct actual job count, one would have to reduce MEGA's initial job projections by about 71 percent. In practice, an announcement that

1,000 direct jobs are expected at a MEGA facility actually means that 294 jobs will be generated on average.

Adopting a different perspective, we also looked at the number of new jobs for which companies were able to claim MEGA tax credits in a single year. In 2006, the latest year for which we have reliable data,[‡] MEGA companies claimed tax credits for a total of 19,551 jobs that were new to their facilities since the signing of their MEGA agreements.[§] These 19,551 jobs represented about 0.45 percent of the approximately 4.3 million jobs existing in the state that year (see Graphic 5).[90]

Graphic 5: "New Jobs" at MEGA Facilities as a Percentage of Michigan Jobs, 2006 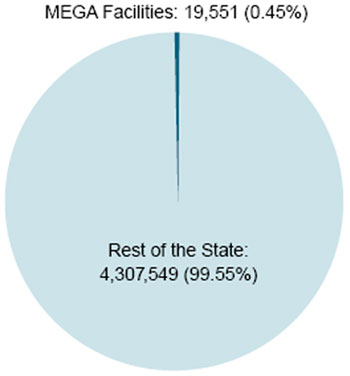 Source: Authors' calculations based on data from the U.S. Bureau of Labor Statistics and the MEDC's "MEGA Credits vs. Conversions" spreadsheets. ("New Jobs" were not all created in 2006; see sidenote [§]).

There is also a large amount of job creation and destruction in the state. Companies open, grow, struggle and close, a process that continually adds and subtracts jobs. Hence, a state might create 800,000 jobs in a given year, but realize a net increase of just 200,000 new jobs because another 600,000 jobs were lost.

Graphic 6: Job Creation at MEGA Facilities as a Percentage of Michigan's Job Creation, 1996-2006 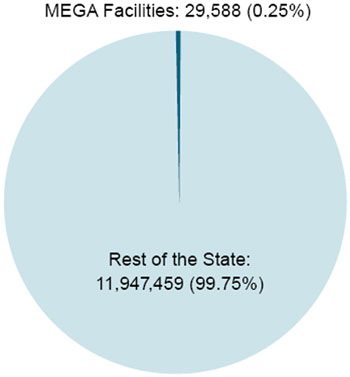 Source: Authors' calculations based on U.S. Bureau of Labor Statistics and the MEDC's "MEGA Credits vs. Conversions" spreadsheets.

MEGA's employment and job-creation figures in Graphic 5 and Graphic 6 do not include the "indirect" and "spin-off" jobs the authority calculates for each MEGA deal. We omitted these figures because they are speculative and based on MEGA's initial job projections, which are largely incorrect. If these jobs were included, however, they would not alter the fact that MEGA's percentage contribution to state employment and job creation is very small — certainly less than 1 percent.

[*] In general, the primary focus of MEGA over the years has been job creation, not retention.

[†] Recall that as explained above, this 56 percent is not comparable to the 44 percent figure calculated in the earlier analysis, since this analysis does not require companies to meet the originally anticipated deadlines.

[‡] MEGA has provided data for subsequent years, but as discussed later in this study, the authority's reports have become increasing ambiguous and incomplete, rendering calculations based on data for 2007 or later tentative at best.

[§] Note, then, that the 18,179 "new jobs" were not all created in 2006; many of them were created in previous years. The jobs still served as a basis for receiving MEGA business tax credits, however, because the jobs were created subsequent to the commencements of the companies' various MEGA agreements, and the jobs still existed. As observed earlier, companies can receive MEGA tax credits for many years after creating jobs, as long as the jobs persist above some minimum threshold.

[¶] For instance, after Bosal Industries was offered a MEGA tax credit in 1997, it created 131 jobs in 1999. By 2004, however, Bosal's MEGA facility had lost these jobs, and the company no longer received credits. Thus, in this job creation calculation, Bosal would be credited with creating 131 jobs, even though it eventually destroyed 131 jobs as well. In contrast, since Bosal did not have any jobs it could claim credits for in 2006, it did not contribute any jobs figure for MEGA facilities in Graphic 5.