Seeing the potential in deaf education 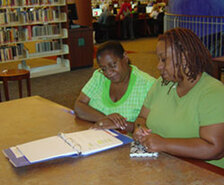 Ernestine Heath, left, and Ava Mullen look over paperwork they have pulled together as part of efforts to open the Metropolitan Bicultural Achievement Academy. Parents often ask them when the school will open, Mullen said.

(Editor's Note: This is the second in a series of occasional articles about people and organizations that would like to open public charter schools in Michigan but are stymied by the legal cap on university-authorized schools.)

"The only thing that's wrong with my child is that he can't hear. Why is he having such a problem?"

This question is frequently asked by parents of deaf students who seek out services at the Deaf, Hearing and Sign Language Center in Detroit, according to Operations Manager Ava Mullen. Confused by the gap between their child's academic capacity and actual school performance, parents turn to DHSC for help.

“It’s like you’re trying to grab something that you see right in front of you, and we just haven’t been able to latch on,” Heath said about the team’s struggle to obtain a charter.

"The answer that they were getting (from school officials) was that their child was on target and that they were doing OK," Mullen explains. "To them (the parents), it just didn't add up."

In response to parents' ongoing desire for a new approach to deaf education, Mullen and others in the community have spent several years pulling together plans for a charter public school called the Metropolitan Bicultural Achievement Academy.

The Detroit school would provide a supportive environment where deaf, hard-of-hearing and hearing children would all learn together. The "bilingual-bicultural" curriculum would rest on American Sign Language as the primary language, and the school would focus from the start on eliminating any communication barriers that hinder academic achievement, organizers said.

Mullen and other planning team members want to challenge deaf and hard-of-hearing students to reach their full potential, she said.

Mullen and Heath joined other community members in 2005 to make plans for a school that they hoped would open by fall 2008. Four years later, the team now hopes to obtain a charter in time to open in fall 2010. The problem is not lack of planning, but lack of charters.

The development team has been ready to move forward with detailed plans, a federal planning grant, an established curriculum, a tentative location, a school calendar, a schools operations manual and students waiting to enroll.

But their numerous applications to a variety of charter school authorizers have yielded no fruit. They cannot acquire a charter authorizing the school to open.

"Our proposed school has been well-received by so many of the authorizers," Mullen said. "It's just been the problem of there not being enough charters available for us to open."

The school on paper

The school would give parents a new option by opening its doors to both hearing and non-hearing children. Mullen reported that parents have expressed interest in a school for all the children in their families.

"Our school would really focus on the family dynamic," Mullen said. "We want families to be able to come to school together."

In an interview with Michigan Education Report, Mullen and Heath said they envision a school where constant learning is available to all children despite communication differences.

"When you're deaf, you are missing so much else that is going on around you, simply because you don't hear it," said Mullen. "In school, I think that that shouldn't happen."

While deaf students often have the services of an interpreter so they can follow lectures, they often miss out on informal learning opportunities — like other students' questions or comments, or announcements broadcast over the school's public address system.

Mullen emphasized the importance of this "secondary learning" and said that the Academy would be equipped with visual devices as well as interpreters to ensure students get these "secondary messages."

MBAA would stress students' literacy development through in-school reading programs as well as through a program to teach parents how to read books to their children using ASL.

Parents also would be invited to training and workshops to learn more about their child's linguistic, educational and social needs and also increase awareness of community services.

For decades, parental action has been crucial in achieving educational equality for people with disabilities. Heath said she has actively advocated for her autistic daughter for more than 15 years.

"I fight for my daughter every day," Heath said. "I want her to be afforded whatever she wants to do in life. Whatever opportunities she can have, I want her to have them. I would want that for any child."

Mullen said that lack of self confidence, not lack of ability, often limits opportunities for deaf students. Organizers want MBAA students to graduate confident in their ability to attend college, enter the workforce and contribute to the community, they said.

In addition to offering sign language classes for all family members, the academy would incorporate individual learning plans for each student, an extended school day and year, reduced student-teacher ratios, tutoring and mentoring as needed, computer and technology training, and a variety of other services intended to help students in and out of school.

Southeast Michigan parents have reiterated the need for more educational options for deaf students through surveys, meetings and informal discussions, according to Mullen.

Wayne County is home to the largest deaf community in Michigan, according to statistics reported by the Wayne Regional Educational Service Agency. The agency reported a population of more than 800 hearing-impaired students as of 2008.

Under federal law, children with a hearing impairment must be given a "free and appropriate public education." That doesn't mean, however, that parents have wide-ranging options.

In Detroit, parents of deaf or hearing-impaired children generally have only a few choices. A child may attend the local public school or a public charter school and receive special education services. Some parents choose to enroll their children in the Michigan School for the Deaf, a residential facility in Flint.

Detroit Public Schools offers instruction to elementary and middle school deaf students at its Detroit Day School for the Deaf. But that is only open to district residents and only to hearing-impaired students, and some parents have expressed concern over the school's limited curriculum, Mullen said.

While each option has benefits and weaknesses, none combine hearing and non-hearing children in classrooms where ASL is the main language spoken by the teacher.

Mullen stressed the importance of siblings of deaf students being immersed in an ASL culture. "If your brothers and sisters are able to sign to you or communicate with you, you aren't all by yourself all day (outside of school)."

"I believe in a public school system and I think that it should survive," she said. "But I believe that parents should have an option, especially when their school isn't really working out for them."

Nonetheless, options for deaf students remain stagnant as the development team fights for a charter.

"It's heartbreaking," said Goenner. "We have groups that could make a very positive contribution and because of the artificial cap we aren't able to work with them to help serve students."

"It's like you're trying to grab something that you see right in front of you, and we just haven't been able to latch on," Heath said about the team's struggle to obtain a charter.

"There are so many people with such fantastic ideas," she said. "It's ridiculous that their voices aren't being heard and that those schools are not able to open, because the kids are the ones who are missing out on it."

Martha Frais, a senior at Grove City College majoring in sociology and Spanish, wrote this article as a 2009 summer intern with the Education Policy Initiative at the Mackinac Center for Public Policy, a research and educational institute headquartered in Midland, Mich. Permission to reprint in whole or in part is hereby granted, provided that the author and the Center are properly cited.