As you can see, there are good reasons to believe that the Michigan Film Incentive, like other targeted economic development programs, is not capable of generating net new jobs or economic growth. This calls the wisdom of the program into doubt.

Nevertheless, if policymakers are intent on continuing state subsidies to the film industry, the state should consider consulting with the company that actually created the REMI Policy Insight model (the model used by the MSU economists) to replicate the work produced for the MEDC, but with one important change: The costs of the program would be included.

The "direct expenditure assumptions" data used by the MSU Center for Economic Analysis is available to the public and could be easily provided to REMI's economists in Amherst, Mass. The total cost of the program could also be provided (including the net MBT subsidy), but for the best results, it might be ideal if the state provided REMI economists with a breakdown of subsidies per project and the estimated costs by year. The question is, Would the Michigan Film Office cooperate?

The Michigan Film Office has been decidedly stingy about providing detailed information on this expenditure of taxpayer dollars — so much so that Mackinac Center Senior Legal Analyst Patrick J. Wright observed in March 2009 that the Film Office violated the law in its annual report by failing to provide the type of detailed information demanded of the program by statute.[24] Wright explained that state law mandates that the report provide detailed spending figures for each film receiving the incentive program's refundable tax credits, but that the Michigan Film Office supplied only the total spending figure, leaving the report "sorely lacking in key information required by state law." The Film Office originally claimed that legal concerns over the "confidentiality" of the data prevented disclosure of figures for individual films, but the Office of the Attorney General of Michigan later disagreed, and the Film Office finally made the information public.[25]

Here's the bottom line: Because the MSU report ignored the program's costs, it is of little use in determining the success or failure of the state's film incentive program. Unfortunately, the study, issued under the imprimatur of Michigan State University, was seized upon and widely reported by the media.

The state should commission a new report based on the very same expenditure data used in the existing one, but mandate that the costs of the program be included in the model. The cost of paying for a second analysis should be funded from the existing Michigan Film Office budget, but commissioned by a neutral state agency, such as the state Office of the Auditor General. The paper should also be subject to publicly acknowledged peer-review prior to publication. In the meantime, the state should refrain from approving any more film incentive awards until the new study is complete. 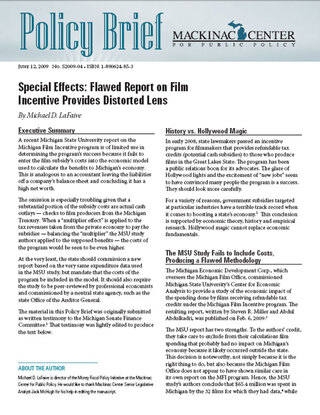