1. Subscribe to the Mackinac Center's free Michigan Capitol Confidential. It reveals which legislators are upholding limited government principles in Lansing — rather than just giving them lip-service at home.

2. Create an account on MichiganVotes.org and sign up for free e-mail notices of action on legislation in "watchlist" categories of interest to you (starting with "taxes").

3. Call, write or e-mail your state representative and senator when they vote or introduce a bill contrary to limited government principles (find out at MichiganVotes.org and in Michigan Capitol Confidential). State lawmakers actually get very little feedback from "real people," so just a few calls on a bill or vote can impact their behavior.

(Note: When you call or write, state your name, address, the bill number and your position. Be brief, be polite, and don't debate, harangue, condemn or argue.)

4. Maximize your electoral clout by always voting in August primary elections. Most legislative and congressional districts are gerrymandered one-party districts, so in Michigan, the real election happens in August, not November. To lawmakers, August primary voters are distinctly "more equal than others."

(Note: Never vote for a candidate you have not researched. If you're not sure, just don't vote that race — those "none of the above" undervotes also send a message.)

5. If your local newspaper, radio and television news reporters and editors aren't reporting important issues or giving the full story, call and let them know. Let them know when they do good work, too.

6. Talk to your own children and grandchildren. Make certain they understand the principles of personal responsibility, free markets and limited government.

7. Engage in online activism. Register on Facebook and become a "fan" of Facebook pages like the Mackinac Center, Capitol Confidential, and other pro-limited government Michigan groups.

8. Consider starting a blog that focuses exclusively on local government and school district issues. Several people can collaborate on this. Become the place where people go to discover what tax, spend and over-regulation issues may be brewing right in your backyard. Become the media.

9. Network with others in your community to keep an eye on local government and school district activities. When they propose anti-taxpayer measures like tax or spending hikes, organize with your neighbors and protest. When they propose positive measures like spending cuts or privatization, do the same — except protest against the special-interest defenders of the status quo. 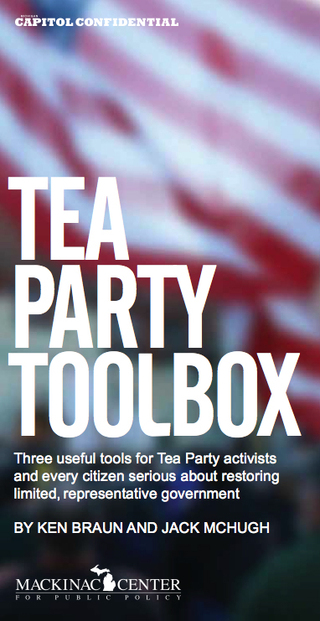