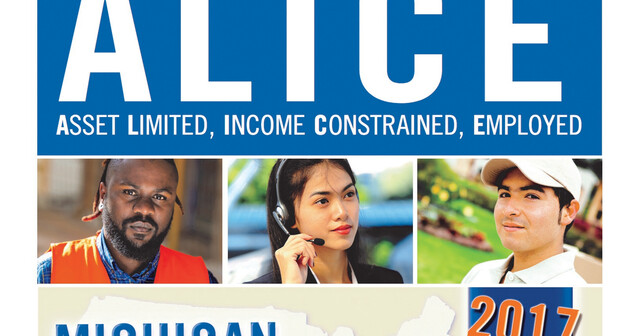 A report from the United Way says you need an income of $56,000 to survive in Michigan.
Publications / Viewpoints

Font size:
The most disappointing quality of the ALICE report is that it gives the impression that the typical middle-class and even upper-middle-class family in Michigan is on the brink of disaster.

Do you need to earn $98,000 or more to be financially stable in Michigan? How about $56,000 to survive? That’s what a widely covered but problematic study says.

In 2014 and then again in 2017, the United Way of Michigan released a report called the ALICE Project, which describe individuals who are “Asset Limited, Income Constrained, Employed.” This “study of financial hardship” takes the typical spending on housing, child care, food, health care and transportation, assumes all that spending is crucial, and then calculates how many households can’t afford those averages.

The project has gotten wide media attention across the nation (sample headline: “40 percent of Michigan households can’t cover expenses”). In the words of the United Way, “ALICE has no fall back, their assets are limited, and their income is constrained. ALICE is one crisis away from poverty.”

But the ALICE measure is not a good way to determine someone’s poverty or need. With just a bit of planning, a typical family earning nearly six figures in any locale in Michigan should have enough to cover its costs and devote something to long-term or emergency savings.

Consider that if this same report were done in 1970, fewer than 10 percent of U.S. families would be “financially stable” and about 60 percent would be below the ALICE “survival” budget. Was that really the case?

According to federal data compiled by the Economist magazine, adjusting for inflation, household size, taxes and transfer payments, the median household income has risen by 51 percent since 1979. In Michigan, real per capita personal income is about 90 percent higher today than in 1970.

If basic household needs were costing a lot more, that would explain the struggle, but there’s not much evidence of that. In general, we’re getting much more bang for the buck when it comes to housing, health care, transportation, food and child care.

Housing has gone from 29 percent of the average household budget in 1960 to 25 percent today, all while the average house size has increased by more than 1,000 square feet. Transportation spending is down since the 1980s, even though the number of cars per household has gone from 1 to 1.6 on average and vehicles are safer and more reliable. Spending on food has declined for decades, shrinking from 25 percent of the typical family budget in 1940 to just 10 percent today. And an inflation adjustment to the cost of food back in 1913 shows most items cost far less today. Bread is a little more expensive, but staples like flour, meat, milk, eggs, sugar and more cost significantly less than they used to.

Health care is an outlier — its cost, largely driven by government policy, has increased significantly, though an analysis from Dartmouth College says the percentage of household income spent on health care has remained constant since 1972 because employers and the government are picking up more of the price. Child care costs have also gone up slightly, from 6.3 percent of the family budget to 7.2 percent over the past three decades.

The bottom line is that, in broad terms, most households are earning more and most of the goods and services they purchase are getting better and less expensive. So how can the ALICE report suggest that nearly 40 percent of Michiganders are effectively impoverished? Part of it is simple math: Half the people will be “below average” on any measurement of all people, so half the population won’t be spending as much as the other half.

More importantly, though, it’s human nature to want to acquire more, and those with higher incomes have been able to buy far beyond what is needed for survival. Americans now have more left over for luxuries and it’s this elevated level of spending that the report uses as a basis for saying that so many people struggle. True, some people can’t keep up with the Joneses in every way, but that doesn’t necessarily mean they’re impoverished or in need of government aid.

This isn’t to say that things are rosy for everyone. From 2000 to 2009, Michigan saw one of the worst income drops of any state since the Great Depression. From 2006 to 2009, we led the nation in people moving out of state. The number of citizens receiving food assistance and other government benefits skyrocketed. We don’t want to downplay the plight of people who are really struggling, but we also don’t want to encourage everyone to see themselves in great need.

The study offers no specific policy recommendations to combat the alleged widespread impoverishment it attempts to quantify. It just lists lofty goals, such as “decrease the cost of household basics,” “[restructure] the Michigan economy,” and “address institutional bias.” Those are fine goals, but politicians can’t do much to reach them, and they can do much harm when trying to manipulate such broad and complex issues.

The ALICE report gives the impression that the typical middle-class and even upper-middle-class family in Michigan is on the brink of disaster. This could make these families think that they are impoverished victims in need of charity or government help. That conclusion would only take attention away from the people who are truly needy, which is where charity and government redistribution should be aimed.