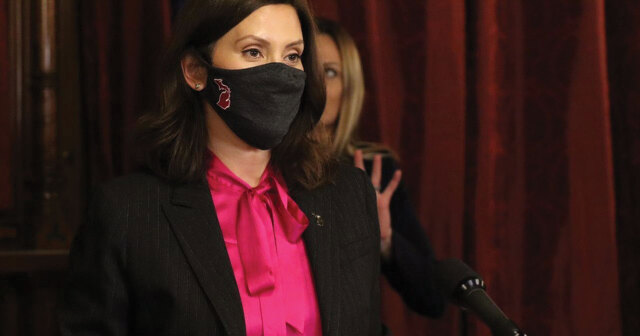 When Will Gov. Whitmer Relinquish Unilateral Control of Michigan Society?

For more than a year now, Gov. Gretchen Whitmer has wielded more control over the lives of Michiganders than any other governor in history. She has regulated everything from when we may leave our homes, what we can purchase and from which businesses, where we may do our work, where we may exercise and with whom we may associate. While some of these restrictions have been relaxed, Michigan residents still do not know when the governor plans to give up her unilateral control over the state.

One might assume Gov. Whitmer will relinquish control when the pandemic is over. But the governor has never provided specifics of what that means or when it will happen. The governor has a goal to get 70% of people 16 and up vaccinated, though she has not said she would end her pandemic authority at that point.

Absent this, there are two benchmarks that, when met, should negate any need for emergency and unilateral control: when every adult has access to a vaccine and when health care capacity is stable. When this is accomplished, the governor should revert to the constitutionally required and normal democratic process.

The dangers of a pandemic to any one individual become avoidable when effective vaccines are available. The virus is no longer a general public threat when people can protect themselves from its transmission; at that point, it becomes an issue of personal responsibility. One reason people can tolerate extreme measures to restrict their movement and civil rights in response to an airborne virus is the accidental harm caused by its transmission. The threat posed by accidental transmission ends, though, when people can prevent themselves from being infected.

Vaccines are not perfect protection, of course. In rare cases, people can still be infected after being vaccinated. The emergency situation that gives the governor unilateral authority, however, should end when people can reasonably protect themselves from the virus.

Indeed, the absence of a vaccine was one of the factors the governor cited as a rationale for her emergency powers. That argument evaporates when there are vaccines available for anyone who wants one.

Only adults, not children, need access to a vaccine for the emergency to end. Fortunately, children are significantly less likely to get infected, suffer health consequences or transmit the coronavirus causing COVID-19. Parents may still consider vaccinating their children, but COVID-19 does not pose to them the health risk that would afford the governor the pretext to exercise emergency and unilateral powers.

All adults are eligible for a vaccine as of April 5. We don’t yet know how quickly everyone can be vaccinated, but people will have reasonable access to a vaccine if they can schedule an appointment within a month.

The last condition for the end of emergency powers ought to be a stable health care capacity. Even with people being able to protect themselves with a vaccine, there still may be a concern about adequate health care capacity if the virus remains prevalent. A good indicator would be the percentage of hospital beds being used by COVID patients. If capacity is stable and hospitalizations remain low — COVID patients take up less than 10% of hospital beds, for example — there’s no reason to hold onto unilateral authority to prevent the harms of the virus.

Of course, Gov. Whitmer should never have made use of unilateral authority to begin with. Michigan residents would have been better served if leaders from opposing parties and different branches of government had gotten together to craft these extraordinary orders. It would have demonstrated that the situation was serious enough to transcend political differences. It would have had practical effects, too: If nothing else, the orders probably wouldn’t have been as arbitrary as they were.

Indeed, the governor wasn’t supposed to have this authority without the Legislature reaffirming it. The state’s 1976 emergency law empowers the governor to immediately respond to a pandemic, but it preserves the democratic process by requiring the Legislature to approve extensions of a governor’s authority. The other emergency law that the governor tried to use to justify her indefinite, unilateral control was struck down by the state Supreme Court. The governor then turned to public health laws and state bureaucracies to allow her administration to control “gatherings” and continue her unilateral and expansive regulation of Michigan society.

The governor must decide when she will relinquish her unilateral control and return to the normal democratic process. She’s given no firm indication of when she plans to do that. When all adults can get a vaccine at their choosing and when health care capacity is stable, the justification for such extraordinary powers evaporates, and the governor should give up her extraordinary powers.