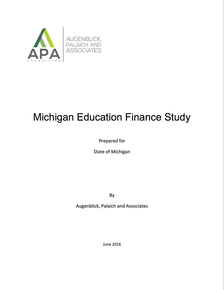 In late June 2016, the state released the long-awaited Michigan Education Finance Study, better known as an “adequacy study.” Twice delayed from its original March 31, 2016, deadline due to errors by different parties, the report purchased by December 2014 state legislation has been greeted with an underwhelming reaction.

Colorado-based Augenblick, Palaich, and Associates (APA) secured a $399,000 taxpayer-funded contract to produce the report. Every one of the company’s 13 earlier studies of different states’ school finance systems concluded with the same call: Spend more money.

As even the adequacy study shows, a massive increase in spending absent any changes will produce insignificant improvements.

Yet readers who pore over the Michigan adequacy study’s 224 pages won’t find one overall recommended price tag. For advocates of spending more on schools, reading the report must have been like waiting until spring break to open a shiny Christmas package, only to find a large number of loose pieces and a thick pack of assembly instructions.

Some people have latched on to the recommended $8,667 per pupil base expenditure, without a clear understanding of what it means. It’s the average amount spent by 54 school districts deemed to be “notably successful,” but only after factoring out certain expenses and applying a series of “efficiency screens” loosely explained in the report.

More comprehensive data from the federal government show that the 54 districts spent on average $11,285 per student on operations in 2014-15. (And that number does not include capital costs.) What of the districts that APA did not deem to be as successful? Federal data show that they (excluding a few high-spending outliers) spent $11,225 per pupil, or only $60 less than the successful ones.

When the highly touted adequacy report leaves attuned observers wondering what the actual figures for K-12 spending are, it’s no wonder that the average Michigander struggles to give a well-informed answer. The Mackinac Center asked people how much Michigan spends on each schoolchild per year, and the answers ranged from $500 to $120,000, though some admitted to having no idea. The actual number is around $13,000 per student per year for all types of spending. This figure takes into account funds outside APA’s analysis of state aid to schools. These funds include federal dollars, funds to build and upgrade school facilities, and specialized dollars for intermediate school districts.

Such a plan might make per pupil funding more equitable, by recognizing that students in different districts with extra learning needs should be funded accordingly. But the recommended spending amounts offer no real hope of improved outcomes for students. Following the state’s legal guidelines, the study noted that base expenditures for 19 of the 54 top-performing districts were on average 10 percent less than the recommended amount of $8,667. And many districts that spent more than that were unsuccessful.

Some people may see the study as supporting the argument that more spending leads to higher performance. But what it really shows is that spending more is an inefficient way to boost performance. Using a regression analysis, APA estimates that each extra $1,000 spent per student increases high school math and reading proficiency rates by 1 percent. (This finding differs somewhat from the Mackinac Center’s more rigorous, multiyear, building-level analysis that found no relationship between increased spending and 27 of 28 academic indicators.)

Yet if the APA estimates were true, Michigan school districts would have to more than double their spending just to ensure one-third of 11th-graders meet the math standard on the M-STEP, the state’s new standardized test.

Even if our eager gift-opener could follow the dense instructions and successfully assemble the new puzzle, a huge letdown would be all but assured. To maximize student achievement, the state should shelve the adequacy study and undertake the hard work of changing the education system’s incentives. For as even the adequacy study shows, a massive increase in spending absent any changes will produce insignificant improvements.

One promising systemic change that will help the cause of education is to enact reforms that engage and empower parents. Most gold standard research shows that robust school choice programs tend to produce better results — not only for students taking part but also for those who remain enrolled in traditional public schools. And there is good news for lawmakers who had the adequacy study cross their desks: These programs almost always save money.