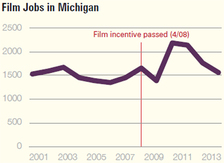 Six years ago, former Michigan Gov. Jennifer Granholm promised in a radio address that listeners should “get ready: the movies are coming to Michigan.” Each dollar spent on the state’s newly minted film tax credit program, the governor claimed, would “generate up to $3 in economic activity.” Since then, Michigan taxpayers have spent $500 million trying to lure Hollywood to the Great Lakes State.

Unfortunately, they have little to show for it. A Senate Fiscal Agency report concluded that Michigan spent $37.5 and $100 million on tax credits in 2009 and 2010 to generate just $21.1 and $59.5 million, respectively, in production activity. In 2013, the Michigan Economic Development Corporation reported that film incentives created zero full-time jobs. Research from the Mackinac Center for Public Policy indicates that Michigan actually has fewer film-related jobs than it did before that half-billion dollar investment.

Policymakers around the country are increasingly moving to eliminate motion picture incentive programs.

But Michigan is not alone. Film tax credits, more commonly known as motion picture incentives, have caused problems from coast to coast. A Missouri commission recently recommended eliminating the state’s MPIs because they “fail to provide a positive return on investment.” According to a New Mexico State University study, New Mexico’s program — once cited by Gov. Granholm as an example of success — generated only 14 cents in revenue per dollar of investment, a figure in line with estimates in other states.

And it gets worse. In February 2014, a federal grand jury indicted two lawyers for fabricating production expenses to qualify for Louisiana’s MPIs. The same month, a California state senator was indicted on charges of accepting cash bribes, paid vacations, and a no-work job for his daughter in exchange for his support of the state’s program. Iowa’s state auditor concluded that 80 percent of MPI credits were awarded improperly, a landmark finding that led to criminal convictions for several people, including three filmmakers who artificially inflated budgets to generate larger subsidies.

None of this should be all that surprising. The film industry has never been known for its fiscal stewardship. In 2010, a leaked financial statement from Warner Bros. indicated that one of the Harry Potter films lost $167 million despite grossing $939 million at the box office. In July 2014, DreamWorks Animation disclosed that the Securities and Exchange Commission was investigating the studio after it reported a $13.5 million loss for “Turbo,” an animated film that more than doubled its budget at the box office. And despite grossing over ten times its budget, Lucasfilm repeatedly tells actors that “Return of the Jedi” never earned a profit.

As if that weren’t bad enough, mounting evidence suggests that MPIs are bad public policy. Think tanks from across the political spectrum — including the liberal Center on Budget and Policy Priorities, conservative American Enterprise Institute, libertarian Reason Foundation, and nonpartisan Tax Foundation — have argued that MPIs don’t succeed at creating jobs or growing the economy.

Scholars tend to agree. Multiple peer-reviewed studies suggest that tax incentives targeted at specific industries do not generate long-term growth. They do little more than lure states into a competitive bidding war, where each state tries to outdo the others by spending more and more on tax incentives. But in the haste to offer the most generous credits, policymakers fail to ask if the added investment is really worth it.

This creates a spending bubble, and that bubble ultimately bursts. Policymakers around the country are increasingly moving to eliminate motion picture incentive programs. Legislators in Idaho and Indiana allowed their programs to expire. In Missouri, Arizona, Wisconsin, and Iowa, legislators took direct action to eliminate MPIs.

It’s time for Michigan to do the same.

Michael Thom is an assistant professor at the Sol Price School of Public Policy at the University of Southern California. This Viewpoint is a service of the Mackinac Center for Public Policy, a research and educational institute headquartered in Midland, Mich. Permission to reprint in whole or in part is hereby granted, provided that the author and the Mackinac Center are properly cited.