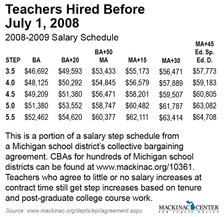 In a recent column in The Detroit News, Iris Salters, president of the Michigan Education Association, claimed that school employees already have sacrificed enough through the years, praising them for "saving" taxpayers almost $1 billion through salary freezes and benefit reductions. If this were true, total state expenditures on teacher salaries would be decreasing. They aren't. Although there were 600 fewer teachers on the payroll, Michigan spent more on teacher salaries in 2008 than it did in 2004, according the state's Center for Educational Performance and Information. Paying more to fewer employees may seem surprising in this economic climate, but it's perfectly understandable once you consider the formula used to compensate teachers.

The rigid single salary schedule is one of the most inefficient ways to compensate teachers.

Nearly all collective bargaining agreements contain a "single salary schedule" for teacher compensation. This schedule builds in "steps" for automatic pay raises for all teachers based on their years of experience and earned graduate degrees or academic credits. Essentially, this means that teachers would receive a pay increase for every year they remain employed by the district, regardless of their students' performance, the district's financial situation, or the conditions of the state's economy.

According to data from American Federation of Teachers, the average annual step increase nationally is 3.16 percent. Although every salary schedule differs, studying a handful of Michigan teacher contracts shows that their average salary step increases are right in line with the national trend. But teachers can boost their earnings at an even higher rate if they complete a certain number of post-graduate academic credit hours or earn a graduate degree. In those cases, teachers can receive as much as a 10 percent boost to their salary in a single year.

If a district gives its teachers a raise, the entire single salary schedule increases by that percentage in addition to the scheduled steps. The AFT reports the national average across-the-board raise from 1997-2007 was 2.87 percent. Most teacher contracts have this automatic raise built right into the contract. In a majority of cases, a salary freeze eliminates this across-the-board increase, but teachers, unless they've "topped out" on the schedule, still receive an automatic raise via steps in the single salary schedule. Unlike most employees, when many teachers experience a salary freeze, their individual take home pay still increases, just not by as much as what they might have anticipated.

Examples of this pseudo salary freeze are plentiful. New teacher contracts recently signed in Mt. Pleasant, Quincy, and Leslie reduced or froze the across-the-board salary increase while maintaining the automatic step increases. Many news reports of teacher contract agreements focus on the across-the-board changes, but fail to recognize the pay raises built in to the salary steps.

In the end, teachers typically receive raises for merely logging another year in the classroom, while Michigan's educational expenses continue to expand. Few private-sector employees can say the same.

This is not to say that teachers should not receive pay increases. But the rigid single salary schedule is one of the most inefficient ways to compensate teachers. It fails to create incentives for teachers to improve student achievement or the overall performance of their school. A performance-based pay system would be a much more appropriate way of compensating teachers, and sophisticated models exist that adequately account for differing learning capabilities and environments. Some districts in Michigan are starting to consider this commonsense reform.

As the economy continues to slide and school districts try to balance their budgets, the overall cost of public education continues to rise, and the percentage of this budget eaten up by employee salaries and benefits rises right along with it. As long as schools use a single salary schedule to compensate teachers, this is not likely to change. Michigan schools must seriously consider changing the way its teachers are compensated if they want to address today's economic realities.