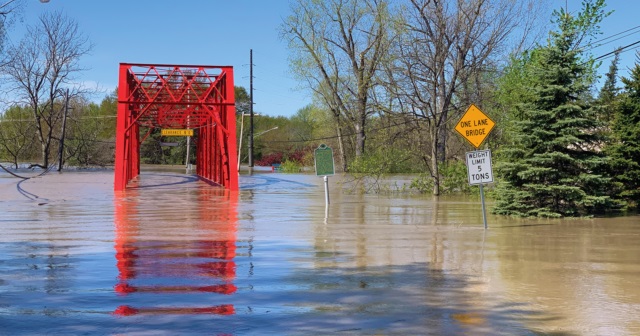 Over 10,000 people had to evacuate due to a failed dam.
Publications / Viewpoints

In May, the Edenville Dam failed, leading to flooding that ruined the homes and lives of many Mid-Michigan residents and forced 11,000 people to evacuate. Weeks later, as people ask why the dam failed, the evidence appears to show that both its owner and the state agency charged with regulating the dam set the conditions that caused it to rupture.

The dam had survived heavier rains in the past. But on May 19, rising water levels in the Tittabawassee River and Wixom Lake scoured out a section of the dam, and water then washed downriver and over the Sanford Dam. Water inundated Edenville and Sanford and flooded low-lying portions of Midland, finally cresting at the highest level ever recorded there.

In February 2018, the Federal Energy Regulatory Commission, citing a “long history of non-compliance” with federal regulations and inadequate spillway capacity, revoked the license that Boyce Hydro held to operate the Edenville Dam hydroelectric project. Boyce Hydro lacked the funds to make required upgrades. It attempted to pass on to area residents a portion of the $8 million price tag for bringing the dam into compliance with federal regulations but failed.

After the dam lost its federal license, jurisdiction over it shifted to the Michigan Department of Environment, Great Lakes, and Energy. The department completed an initial inspection in October 2018 that noted “moderate deterioration” of the spillways, but reported “no observed deficiencies that would be expected to cause immediate failure of the dam.”

After the dam failed, however, the department said it had “strong concerns” about the dam’s spillway capacity when it assumed jurisdiction. Officials also reported they were waiting on a nearly completed structural assessment. The 2018 inspection report did not mention inadequate spillway capacity, nor did it recommend further assessments or repairs.

Throughout the discussion about spillway capacity, Boyce Hydro had consistently pushed to lower the water levels in Wixom Lake, the lake created by the dam. Although drawdowns raised the ire of local residents, the company maintained that lower water levels in the lake formed “a safety buffer for flood water discharge” and were essential to maintain the dam’s structural integrity.

Boyce Hydro’s lawyers claim that, since Michigan regulators assumed jurisdiction, they have kept regulatory activity “exclusively focused on environmental issues.” The company points to an April 30, 2020, lawsuit filed by Michigan Attorney General Dana Nessel, EGLE, and the Michigan Department of Natural Resources as proof. The suit claims Boyce Hydro “dramatically lowered the level of Wixom Lake for an extended period in both 2018 and 2019 …, causing the death of thousands if not millions of freshwater mussels, many of which are federally endangered.”

That focus on mussels led Boyce Hydro spokesman Lee Mueller to boldly state after the flood that regulators “clearly care more about mussels living in the impoundment than they do about the people living downstream of the dam.” But EGLE spokesperson Nick Assendelft pushed back against Mueller’s claims in a May 22 email, arguing that “EGLE directed Boyce to follow the court-ordered lake level requirements.”

Assendelft also reiterated a claim that the company had a “troubling track record of noncompliance and neglect.” He argued, “Boyce’s assertion that its illegal emptying of Lake Wixom — to the detriment of property owners and the environment — was motivated by concern for the safety of local residents is false.”

Boyce Hydro claims it acted quickly on May 15, ahead of the storm, to once again begin drawing down lake levels. But clearly, it was unable to draw water levels down sufficiently to hold the flood waters back. Now, in the immediate aftermath of the breach of the Edenville Dam, numerous lawsuits have been filed against both Boyce Hydro and the state’s environmental department, and demands for an independent investigation are mounting. Gov. Gretchen Whitmer has called for EGLE to lead that investigation, a suggestion that has been widely panned as wholly unrealistic, given its direct involvement in the dam’s management. The notion of an independent investigation requires that a neutral team of experts in dam construction and management be brought in. But EGLE employees are far too close to the issue and can’t reasonably be expected to lead an investigation into their own activities.