Salt Bill Would Raises Prices On All To Benefit One Company

Senate Bill 363 is held up in the Michigan House 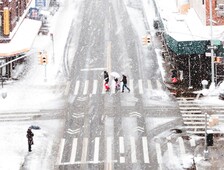 The Michigan Senate came together on a bill that raises costs for all citizens to benefit one select company.

That’s not exactly how most politicians would describe it, but that is the actual effect of Senate Bill 363. The proposed law requires the state to pay higher prices (up to 8 percent) on salt it purchases from other countries versus what it would pay to purchase salt from a company located in Michigan. It is believed that the only Michigan-based company that would benefit from an artificially higher price is the Detroit Salt Company.

This is pure protectionism. The key argument from proponents, noted in the Senate Fiscal Agency report on the bill, makes that clear:

One product that the state purchases is road salt, and one of the suppliers provides the salt from a mine located in Detroit. There are concerns that companies with mines in Canada are undercutting the ability of the company mining in Detroit to supply road salt based on pricing. According to some, this activity could result in the mine's eventual closure. To address this, it has been suggested that products mined in Michigan receive preferential treatment for the purposes of state procurement.

In other words, one company isn’t able to offer a product as inexpensively or efficiently as its competitors, so it has sought the help of politicians to protect it from rivals.

Singling out one company for special treatment is bad policy and does nothing to improve the state’s economy. While the idea may save or add a few jobs at the Detroit Salt Company, it will cost many more throughout the state because of higher prices. It shifts spending from a more productive area to a less productive one, benefiting the few at the expense of the many.

Though the bill flew through the Senate, applause is due to Sen. Patrick Colbeck and Mike Shirkey – the only two “no” votes. But a coalition of business groups, local governments, salt haulers and truckers, unions and conservative groups has come out strongly against it. That has helped it get bottled up in the House Commerce and Trade Committee, where it should stay indefinitely.