Twenty years ago, on March 15, 1994, Michigan voters approved "Proposal A," a fundamental overhaul of Michigan's tax and school finance system.

The product of intense legislating in the second half of 1993, the measure was driven by a public demand to "cut-and-cap" local property tax burdens. A related goal was gradually reducing the disparities in school funding across districts.

The first part was accomplished by a substantial rollback of property tax millage levels, made possible by increasing the state sales tax from 4 percent to 6 percent, the imposition of a new 6-mill state education property tax, and substantial increases in taxes on cigarettes and real estate purchases. On balance, the measure represented a substantial tax cut.

At the same time, public school funding was transformed from a system that relied primarily on local property taxes. The new system created a complex formula combining revenue from those rolled back local millage rates with money from the new state school tax and the other tax hikes. Importantly, per-pupil state foundation allowances became the heart of the new system.

The initiative has achieved some of its goals and fallen short on others. One unexpected outcome was to facilitate a robust schools-of-choice system, which came about when a subsequent law freed children from ZIP code enforced school assignments, allowing them to attend a neighboring school district that has space. Because under the new system money follows individual students to the district their parents choose (or to the charter public school, another subsequent innovation), schools have a sharp incentive to raise their game: If a student walks from his local district, the state foundation allowance goes with him or her.

On the property tax front, the outcome is more ambiguous. After the initial rollback, Proposal A capped property tax increases through a combination of limits on annual assessments and a ban on certain types of local school millage increases. It introduced a critical new distinction to the lexicon of school finance, the difference between property tax mills imposed to pay for ongoing school operations versus ones for capital expenses like buildings and infrastructure. Increasing the former became prohibited.

Unfortunately for taxpayers, depending on where you live, the gains from the initial rollback of school operating millages have largely evaporated. That's largely because the public school establishment has perfected the art of dodging restrictions on taxpayer-funded electioneering to jam through large capital spending millage increases in off-cycle, low-turnout elections (see graph below). 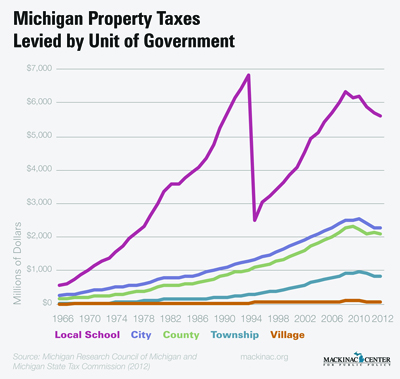 Most commonly these elections authorize higher property taxes to repay the debt on money borrowed to buy new facilities that many regard as gold plated, and for spending that private sector accounting would call operating expenses, like new buses and technology upgrades. Since 1996, revenue from "school debt, building and site millages" increased 75 percent after inflation.

The other Proposal A promises have held up better. Despite incessant complaints from a public school establishment whose appetite for more taxpayer dollars has no limits, Michigan schools are very well funded compared to most states, and differences in funding levels across different school districts have gradually narrowed. Higher taxes to buy gold-plated school facilities are unfortunate, but to some extent local electors have only themselves to blame for not being better informed and not showing up for those stealth elections in February and May.

In contrast, the Proposal A limit on property assessment increases has proven more effective and durable. Concerns about families and seniors being forced to sell their homes due to rampant assessment increases were the fuel that ignited the initiative, and are largely a thing of the past. Overall, Proposal A has been a three-steps-forward-two-steps-back experience.

The 1994 Proposal A Ballot Language:

A proposal to increase the state sales and use tax rates from 4% to 6%, limit annual increases in property tax assessments, exempt school operating millages from uniform taxation requirement and require 3/4 vote of Legislature to exceed statutorily established school operating millage rates. The proposed constitutional amendment would:

1.   Limit annual assessment increase for each property parcel to 5% or inflation rate, whichever is less. When property is sold or transferred, adjust assessment to current value.

Should this proposal be adopted? Yes___ No___

Michael D. LaFaive is director of the Morey Fiscal Policy Initiative and Jack McHugh is senior legislative analyst at the Mackinac Center for Public Policy, a research and educational institute headquartered in Midland, Mich. Permission to reprint in whole or in part is hereby granted, provided that the authors and the Center are properly cited.