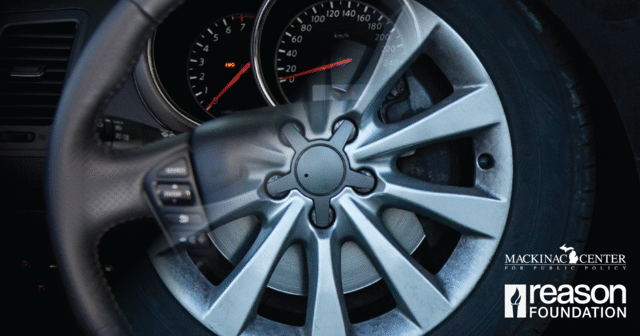 MIDLAND, Mich. — Michigan’s road funding system would be improved if policymakers start piloting a transition to a new user fee system, according to a study released today by the Mackinac Center for Public Policy and Reason Foundation. The study, “Michigan’s Road Forward: Replacing the Fuel Tax with Mileage-Based User Fees,” examines the challenges facing the state’s road funding system and offers solutions to secure adequate funds to meet future needs.

One problem with continuing to rely on fuel taxes as a source of revenue for roads is that they are unlikely to keep up with infrastructure needs over the long-term. Despite recent increases in the fuel tax, the study explains how these revenues will decline over time, as average fuel efficiency continues to improve and as the popularity of electric vehicles increases.

“It’s important to ‘future-proof’ Michigan’s highway revenue, making it independent of vehicle propulsion sources,” said Robert Poole, study co-author and director of transportation policy at the Reason Foundation. “About a dozen other states have carried out pilot projects to test per-mile charges, and they have learned a lot about what works and what doesn’t work. Michigan can benefit from their experience by implementing a pilot project on per-mile charges in the near future.”

Another problem with funding roads based on fuel taxes is the ups and downs of the price of gas. When gas prices are higher, motorists tend to buy less fuel, which further cuts into needed highway revenue.

Mileage-based user fees would also fix several other shortcomings of the fuel tax. Drivers could pay based on which types of roads they use. For instance, driving on a highway that’s very expensive to build and maintain could cost more to use than driving on a local county road. Heavier vehicles like trucks, which do substantially more damage than passenger vehicles, could pay a higher rate, as they already do on toll roads. This provides a means for road users to pay their fair share of the costs of road construction and maintenance.

Paying for roads this way does require collecting data on how much each person drives. This had led to concerns about privacy protections related to MBUFs. The study explains how these concerns can be addressed with a well-designed system to allow drivers to choose the level of privacy that most suits them. The nearly dozen states that have MBUF pilot programs in place have not experienced significant problems related to privacy protections.

“Raising revenue for roads through fuel taxes is unsustainable,” said Chris Douglas, associate professor of economics at the University of Michigan-Flint, a member of the Mackinac Center's Board of Scholars and co-author of the study. “Mileage-based user fees create a more equalized and sustainable way to pay for public roads.”