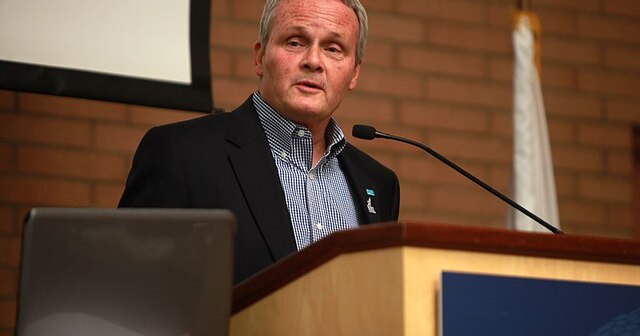 MIDLAND, Mich. — The Mackinac Center for Public Policy is pleased to announce that Lawrence W. Reed, President Emeritus of the Mackinac Center, will be presented with the Grand Cross of the Order of Merit of the Republic of Poland. This is the highest honor awarded by Poland to a foreigner. Previous recipients include President Ronald Reagan and British intellectual Sir Roger Scruton.

Reed served as the Center’s president from December 1987 until September 2008. During his tenure, the Mackinac Center emerged as one of the largest and most effective think tanks in the country. After two decades at the helm of the Center, Reed left to become the president of the Foundation for Economic Education. He remained at FEE until his retirement in 2019.

After visiting communist Poland in 1986, Reed began publishing articles about Polish heroes who were leading an underground resistance. While he was at the airport to return home, he was arrested, detained, and had his possessions searched and seized before being expelled from the country. This was likely prompted by a speech he gave at Jagiellonian University in Kraków, in which he said that a revolution was coming.

He returned to Poland several times after the collapse of its communist regime and continued to forge relationships with freedom leaders.

A statement from the President of Poland, Mr. Andrzej Duda, notes Reed’s dedication to the fight for freedom in Poland.

“Since his first trip to Poland, Larry is ideologically and emotionally tied to Poland and her fight for freedom, a commitment lasting to this day,” said Duda. “In a contemporary free world, Poland has few such dedicated and influential supporters and enthusiasts. For this long-term commitment to freedom and to Poland, the free Republic of Poland has yet to thank him — until now.”

In his book, Real Heroes: Inspiring True Stories of Courage, Character and Conviction, he included several chapters detailing the stories of some of the Polish heroes he met during that initial visit. In addition to his own writings, Reed also raised funds to translate Milton and Rose Friedman’s Free to Choose into Polish. He later organized a program that translated and published the works of F. A. Hayek, Ayn Rand, Ludwig Von Mises and other prominent free-market thinkers for a Polish audience.

“Larry Reed played a pivotal role in bringing global awareness to the harsh realities Polish citizens were facing under the oppression of communism,” said Joseph G. Lehman, president of the Mackinac Center. “His stories and experiences have prompted real change and continue to inspire the next generation of freedom fighters. There are few who have done more to assist the fight for liberty, not only in Poland, but around the globe. I am proud to call him my friend and colleague.”

You can learn more about the award here.