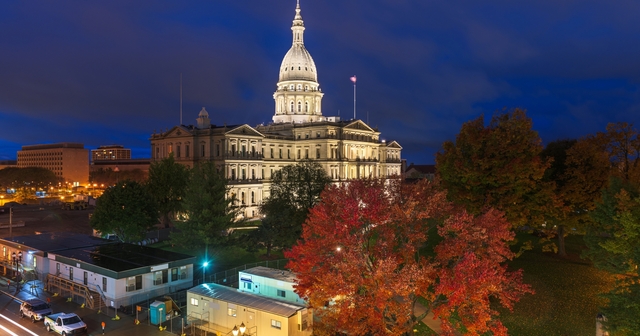 MIDLAND, Mich. — The length of time most legislators could serve in the Michigan Legislature would effectively double if Proposal 1 is passed, according to a new report released today by the Mackinac Center for Public Policy. The report, which does not take a stance on the issue, examines the impact the proposal would have on legislators and their constituents. The proposal is one of three on the ballot for the Nov. 8, 2022, election.

The Michigan Constitution currently allows people to serve three terms in the House of Representatives and two terms in the Senate. Given the two-year terms in the House and the four-year terms in the Senate, legislators can serve a maximum of 14 years. However, due to the scarcity of opportunities to win a Senate seat, few legislators make it to the maximum length of service allowed under current rules. Only 48 lawmakers, fewer than one in ten, have served the full 14 years since the limit was approved by voters in 1992. The majority of lawmakers, 54%, leave after six years.

If passed, Proposal 1 would amend the Michigan Constitution to end the separate limits on each chamber and instead put a 12-year cap on the total amount of time that could be served in the Legislature. The total length of time someone could serve would be shortened from 14 years to 12. It is likely that even fewer legislators would attempt to serve in both chambers if Proposal 1 passes. Most will find it easier to max out their time allowed in office by staying in the chamber to which they were first elected.

“This brief answers questions that voters will likely have about this proposal,” said James Hohman, director of fiscal policy and author of the report. “Voters ought to ask whether the likelihood of longer service for their lawmakers will help ensure that they better reflect the will of constituents.”

In addition to modifying the state’s term limits, the proposal would also create new financial disclosure requirements. Under the new requirements, state elected officials would have to file an annual report about their personal finances. This would include everyone elected to the House and Senate, as well as the governor, lieutenant governor, secretary of state and attorney general. However, there is little scholarship on whether mandatory financial disclosures are effective at preventing corruption.

The report also explains the arguments made by supporters and opponents of the proposal. Supporters believe that allowing the typical legislator to serve a longer term is good because it would result in more experienced lawmakers who would better handle the needs of their constituents. Opponents believe the current term limits produce more legislators who have lived and worked alongside their constituents in their communities. They argue that these people better reflect their constituents' views.