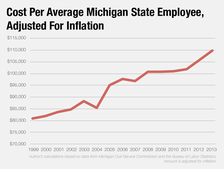 While union and media reports often claim state employees have taken large compensation cuts, a look at the numbers shows that taxpayers are the ones getting a raw deal.

Taxpayers are paying hundreds of millions more for state government employees than they did a decade ago, but supporting fewer workers.

Over that same period, the average salary of a full-time state employee increased slightly, from $59,963 to $61,101 adjusted for inflation. But the benefits of workers, mostly as health care and pension costs, have skyrocketed from $21,809 to $48,889 per employee, a 124 percent increase above inflation.

Across the board, public employees feel like they aren’t getting raises and yet taxpayers are contributing more and more to the system.

This works out to state taxpayers paying, in real dollars, nearly $220 million more for about 22 percent fewer workers. Unless state services have gotten monumentally better, this a bad deal for taxpayers.

Yet state employee unions are pushing for raises. The contracts for state workers ended at the start of 2014, and the union representing many of them — UAW Local 6000 — has claimed there have been "years of concessions," and says members are "under the gun."

But the unions are missing the point. Taxpayers and union employees are both feeling the squeeze because of the skyrocketing cost of health care and pension benefits.

The state is dealing with the problem of health care costs. For 2014, against the wishes of the unions, the Michigan Civil Service Commission moved state workers to a more affordable health plan. This has decreased average employer costs for health insurance 9 percent.

Retirement costs are another story. In the past few years, the primary increase in the cost of compensation is catching up on previous underfunding. There are gaps in Michigan's closed out pension system and the state is trying to prefund retiree health care benefits.

Spending more for fewer state employees has contributed to a large discrepancy in benefits between state, local and school district government workers and those in the private sector, estimated at $5.8 billion by James Hohman, assistant director of fiscal policy at the Mackinac Center for Public Policy. Moving to the new health insurance system and having fewer workers collecting a pension means the state is taking real steps to rectify this imbalance.

But there are problems on the horizon because of the way other government workers are compensated. This situation shows why it is important for state and local municipalities to move from a defined benefit to 401(k)-type retirement plans.

Because of the retirement benefits shift for state workers, Michigan is slowly paying off what is owed and will not be able to rack up unfunded liabilities in the future. But public employees working for school districts are still in a defined benefit system that is billions underfunded.

Across the board, public employees feel like they aren’t getting raises and yet taxpayers are contributing more and more to the system. Legislators should solve this problem now. The sooner the state moves new school employees to a defined contribution plan, the less the fiscal squeeze will be felt in the future by districts, taxpayers and employees.

Under a defined contribution, 401(k)-type plan, the money and control rests with the worker, not politicians who — on both sides of the aisles — have repeatedly failed to fully fund state employee pension systems. This aligns benefits more closely with the private sector and is the only guaranteed way for the state to truly keep its promises to workers.

Jarrett Skorup is a research associate at the Mackinac Center for Public Policy, a research and educational institute headquartered in Midland, Mich. Permission to reprint in whole or in part is hereby granted, provided that the author and the Center are properly cited.