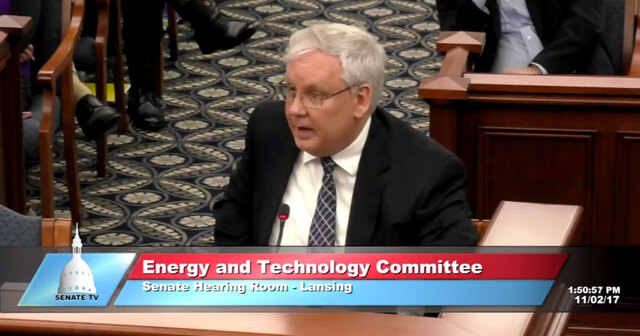 Testimony: House and Senate bills gets government out of the way

Dr. Theodore Bolema is an adjunct scholar with the Mackinac Center. He is also a senior fellow at the Free State Foundation, specializing in technology policy. His article, below, first appeared on that organization’s website. It is followed by his testimony to legislators in Michigan.

The Michigan Senate is considering a pair of bills that would limit fees, streamline permits, and generally make it easier for private network providers to deploy both wireline broadband and 5G wireless broadband.

Senate Bill 636 would cap permit fees required for a wireline telecommunications provider working within a county right-of-way and set limits on bonding and insurance requirements for wireline telecommunications providers working within a county right-of-way. It is similar to the package of HB 5096, HB 5097, and HB 5098 currently being considered by the Michigan House of Representatives.

Senate Bill 637 would provide similar regulatory relief for wireless providers. It would limit fees charged by local government for attachments to utility poles and access to other facilities; provide for use of rights-of-way; put limits on certain permitting processes and zoning reviews; prohibit certain commercially discriminatory actions by state or local authorities; and prohibit certain indemnification or insurance requirements.

I had the opportunity to appear before the Michigan Senate Energy and Technology Committee on Nov. 2, 2017. Sen. Mike Nofs chaired the hearing on the proposed bills.

The written testimony on Senate Bills 636 and 637 follows:

Chairman Nofs, Vice Chairman Proos, Ranking Member Hopgood, and Members of the Committee, thank you for the opportunity to testify. I am a Senior Fellow of The Free State Foundation, a non-profit, nonpartisan research and educational foundation located in Rockville, Maryland. The Free State Foundation is a think tank that, among other things, focuses its research in communications law and policy. I am an economist and an attorney, specializing in regulatory law, economics, and policy. I have served on the faculties of Central Michigan University and the George Mason University School of Law, and also in positions in the U.S. Department of Justice and the U.S. Department of Energy.

Removing local regulatory barriers to broadband deployment should be a priority for policymakers who want to see more people have access to broadband. At the federal level, the Federal Communications Commission by unanimous vote in April of this year adopted a Notice of Proposed Rulemaking, with a stated purpose to “accelerate wireline broadband deployment by removing barriers to infrastructure investment.”

The FCC is currently seeking comments on specific areas where the Commission could use its authority to prevent the enforcement of state and local laws that inhibit broadband deployment.

So it is a welcome development to see the Michigan Senate addressing unnecessary impediments to broadband deployment in SB 636. An important reason why broadband deployment has been delayed is because local governments have been slow to issue permits and licenses, made it difficult for private providers to obtain rights-of-way, and charged fees that far exceed the costs to the local government.

Giving broadband providers more certainty about their costs is a helpful step in encouraging more broadband investment, and should lead to more access and more choices for broadband customers in unserved and underserved areas.

A movie that currently takes a few minutes to download over 4G wireless will take just seconds over 5G networks. Nationwide, future deployment of 5G wireless networks is projected to produce an additional $500 billion of economic growth, and wireless operators are expected to invest an estimated $275 billion over the next decade to deploy 5G, which will create about 3 million more jobs.

Michigan accounts for about 3% of the U.S. GDP, so if that economic impact is proportionate, those projections work out to about $15 billion in economic growth and 90,000 more jobs in Michigan. If those projections are even halfway correct, you can see how important and transformative 5G is going to be, and how great the cost of delays could be. The FCC is also looking at what it can do to remove or reduce local barriers to 5G deployment.

At least 20 states are currently considering legislation much like SB 637, including Arizona, which enacted its bill earlier this year.

Faster and better broadband access is important for Michigan’s economic growth. The legislature can plan an important role in preventing unnecessary delays in broadband deployment in Michigan. SB 636 and SB 637 are consistent with the approaches being followed at the federal level and in other states seeking to accelerate access to both wireline and wireless broadband. While the details of the bills differ from state to state, their common goal is to provide for access to municipal properties, reasonable costs and fees, and streamlined permitting. Thank you for giving me the opportunity to testify today.